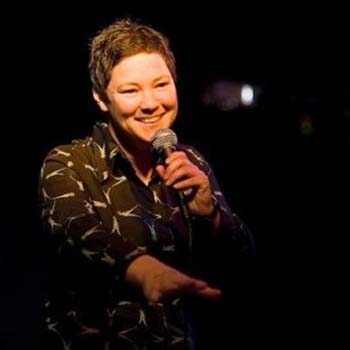 Julie Jepson burst onto the comedy circuit in 2005 when she reached the final of the Funny Women Comedy Awards on only her third gig.
Since then, she has become a sought after compere, stand-up comic and corporate host. She regularly hosts comedy nights at The Komedia and Upstairs at The Three and Ten in her home town of Brighton. Both venues have consistently been voted 'Best Comedy Club in the South' by Chortle. Julie also books and hosts the hugely popular monthly comedy club funnyhaha in Brighton.
As a comedian and comedy host, Julie is down to earth, very quick and a great improviser. She has Northern charm by the bucket load and she can hold any evening together in a fun comedy fashion.
She mixes bubbly, conversational and wonderfully pithy stage patter with an array of wonderful comic voices, persuasively guiding the audience through her curious worldview with a disarming charm.
Julie regularly performs in comedy clubs and theatres up and down the country, in Europe and at the Edinburgh Fringe Festival, Brighton Comedy Festival and Festival Fringe, Birmingham, Reading and Exeter Comedy Festivals as well as Manchester, Brighton, Oxford and Nottingham Pride Festivals. She is also much in demand for corporate and private events.
Julie has appeared live on The Richard Hammond 5 O'Clock Show for ITV.
A professionally trained actress, Julie has worked on stage, in television and on radio,  and is an experienced voice over artist.
"Intelligent stand-up that is instantly engaging. Truly fabulous."  BBC
"A rising star. Our Julie has an instant rapport with any audience. Animated, hugely watchable, likeable and very funny."  Chris Holliday, BBC Radio Manchester
"I found it quite difficult to breathe because I was laughing so much. There was a room full of women with mascara running down their cheeks, it looked like an Alice Cooper convention."  Lou Lou Cousins (promoter of Pinky Moo Moo, St Leonards)
"We all want to keep Julie Jepson locked in a cupboard in our office so we can bring out to cheer us up whenever we need her! For us, as the charity, we were so relieved when she stepped onto the stage and started to compere so warmly and confidently, because I think at that point we all relaxed and knew it was going to be both a really funny and fun night, which it definitely turned out to be."  Lynn Stevens for Target TB at Charity Chuckle
Read More