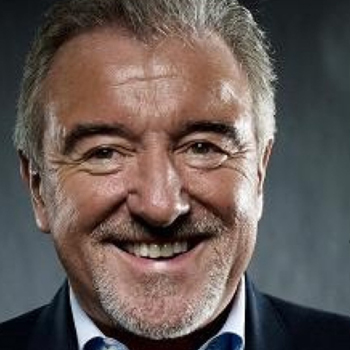 Terry Venables was born in Dagenham on 6th January 1943.  His footballing career began at the age of just 15 when he joined Chelsea as an apprentice.  In 1960, two years later, Terry turned professional and played 202 League games and scored 26 goals for Chelsea until 1966 when he transferred to Tottenham.

In 1964 Terry won his two full England caps, against Belgium and Holland.  Between 1969 and 1976 he transferred from Tottenham to QPR (1969) to Crystal Palace (1974), and in 1976 Terry commenced his managerial career. As manager of Crystal Palace he successfully promoted them to 13th place in Division One from Division Three. In 1980 Terry resigned to take over at QPR and by 1983 had taken them to Division Two and had become a major shareholder and managing director.

1984 saw a move overseas as Terry became manager of Barcelona.  Just one year later Barcelona won the first Spanish League title for 11 years.  In 1986 they reached the European Cup Final but lost on penalties to Steaua Bucharest.

In October 1987 Terry was appointed Tottenham manager.  By 1990 Terry had got them to third position in Division One.  In 1991 he launched an unsuccessful £20 million bid for the club and in June of the same year became Chief Executive after Alan Sugar took over the club. In 1994 Terry was named England manager, beginning with a win over Denmark at Wembley in March.  His brave campaign in Euro '96 ended with semi-final loss to Germany after a penalty shoot-out.

Since the England job he has had numerous roles at different clubs as well as being a popular pundit , game summariser and broadcaster.  For over 20 years he was a regular football commentator on BBC and ITV and then for Al Jazeera.
In the corporate market he is a popular after dinner speaker.
Read More