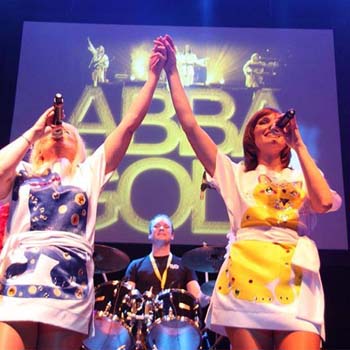 Abba Gold have been performing together for 25years. They take their name from Abba's Greatest Hits album  - and have been an integral part of the recent upsurge in popularity of the 'Tribute Band'.
Their fantastic seven piece show has toured all over the world and they have performed over 2200 shows, playing to more than 2 million people and that doesn't include the millions of people who have seen Abba Gold's numerous television appearances.
Their largest audience was 93,000 when they headlined a massive festival in Aberdeen. Also on the bill were the Sugababes, Gareth Gates, Darius and Hear'say.
Abba Gold has played in Germany, France, Belgium, Holland, Switzerland, Austria, Spain, Portugal, Italy, Russia, Latvia, Estonia, Bahrain and South Africa and famous faces in their audiences include Sir Richard Branson and Sir Alan Sugar.
Abba Gold are one of the most influential Tribute Bands of all time and have spawned several imitations.
Goldust Duo is an ABBA Gold spin-off - Karen and Mark perform a repertoire that includes songs from the 60s and 70s right up to the latest chart hits.

"After performing at four of my corporate summer shows I invited them back for the final party for Virgin Airlines Gold Card Holders."  Richard Branson, Virgin Group