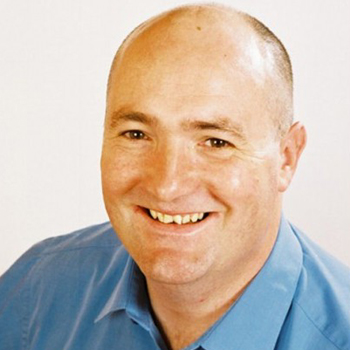 Motivational speaker Adrian Webster is author of Polar Bear Pirates and their Quest to Reach Fat City, with its cast of characters to be found in every workplace. Originally a policeman, then head of a successful IT sales team, Adrian shows how to create winning environments and how to deal with the "Neg Ferrets" trying to block your path.
About
Adrian Webster is a highly entertaining motivational speaker who specialises in delivering key messages in a humorous and completely unique, down to earth style that audiences can easily relate to. He combines raw enthusiasm with his vast amount of hands on experience as a motivator, team builder and salesperson to unleash an unforgettable cocktail of addictive inspiration.
Warm, witty, engaging and energetic, Adrian inspires individuals, transforms teams and electrifies entire organisations with his simple but highly effective philosophy based on Tiny Noticeable Things (TNTs) and the Shape of Integrity. Plus, he reaches millions more across the world through his bestselling Polar Bear Pirates series of books.

Adrian is regarded by many as one of Europe's leading authorities on sales motivation, he is without doubt one of its most exciting speakers!

The son of a Yorkshire coal miner, he started off his colourful career as a Police Officer in St Pauls, Bristol, leaving shortly after the St Paul's riots to go 'back to school' and to be President of Southampton Students Drama.

Fed up with being a poor student, he spent the next four years building up a highly successful dairy company from nothing by knocking on thousands of doors persuading families to buy his milk! Having established the dairy business he went to the USA on holiday but soon found himself working as a DJ and lifeguard. On his return to the UK he worked as a radio presenter on local radio in Bristol.

To help fund his career, Adrian started selling a wide range of products, ranging from frozen food to houses. He quickly discovered he could make some real money in sales and began taking it seriously.

In 1987 he moved into IT sales and by 1989 he had established himself as one of the most successful sales professionals in the industry.

After two years as Corporate Sales Manager of US Robotics, he joined Northamber Plc  as Group Sales and Training Manager responsible, over a five year period, for successfully recruiting, training and motivating 150 sales staff to achieve phenomenal success.

It was during this time that Adrian discovered his exceptional ability to inspire, build and develop inexperienced teams into some of the most productive in the IT industry.

Adrian shares with the audience his ideas on the characters that he has identified in most teams, companies and organisations. They include amongst others: Neg Ferrets, Bloaters, Sinkers, Jaffa Gaffas and Polar Bear Pirates, all of which most people will easily recognise!

Today, as well as being a professional speaker, Adrian works as a consultant devising and implementing team building and motivational performance programmes for both sales and non sales environments. He also works with a select number of private clients as a personal development coach and gives keynote talks Virtually to clients.

“Adrian was brilliant – he did a fantastic job, particularly with the whole virtual thing.”

“Over the last four months, we’ve spent so much time at home and in front of a device that screen time feels more like scream time! Along comes a stranger, stirs up a whole load energy, drive and anti-chaos and we’re left with this wonderful feeling of…

I thought Adrian would be another one of those speakers, he wasn’t, Adrian was the ignition to get us thinking clearly about how we get together again after lockdown. His virtual talk was the best thing I’ve seen in a long-time - this is screen time I would gladly engage with anytime.”

“Absolutely outstanding motivational talk from Adrian Webster who joined the Adyen Virtual lunch today and blew our minds with TNT’s!”

“Our favourite speaker of the day! We had on the spot positive comments. He was lovely to work with and a big hit with the members.”

"I've had the pleasure of booking Adrian for two separate companies to do some motivational speaking. He is very down to earth and connects with the audience mixing up the emotions of comedy and tragedy that keeps everyone engaged and hooked from the moment he starts. The key messages are delivered really well though it feels more like you have been to a show than a lecture! The feedback from the audience was great and at both occasions has proved to be a real inspirational note to end the day session."

"Your energy and enthusiasm was infectious and was much appreciated. You managed to get key messages across, interspersed with some great humour, and I know your talk was very much enjoyed by the multi-lingual audience. A few days later, some managers are making references to your stories and using them to convey certain messages."

"Adrian Webster went down very well with a really difficult audience. He was a pleasure to work with and I am sure we will use him again in the future."