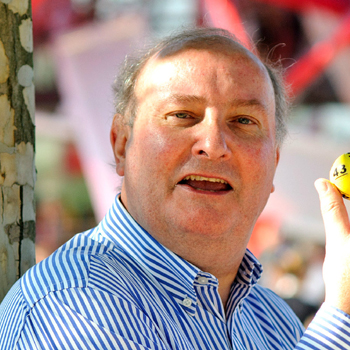 Alan is a senior British continuity announcer on BBC radio and television, and possibly best known as the "Voice of the Balls" on the National Lottery programmes, having announced the winning numbers since the start of the lottery.

He has been a well known voice across BBC output for over 30 years, and was a regular sidekick to the late Sir Terry Wogan on Radio 2's "Wake Up to Wogan" breakfast programme where he was most commonly known as "Deadly".

He was educated at King Edward VI School for Boys in Birmingham, and the University of Birmingham.

His radio career took off at BBC Pebble Mill where he worked as a station assistant for BBC Radio Birmingham, and then he spent four more years in Plymouth and Exeter as a producer/presenter for BBC Radio Devon.

In 1987 Alan joined the Presentation Department of Radio 2 at Broadcasting House in London, voicing trails and promotions. Since 1995 he has been providing live commentary for the National Lottery draws, while in the US he is the voice-over announcer for ABC's Dancing with the Stars (the US version of Strictly Come Dancing), which he has done since 2005.

Away from the airwaves, he is the co-owner (with some fellow radio announcers) of a red Routemaster double-decker bus.