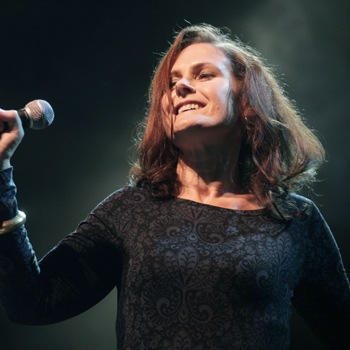 Alison Moyet was born in Essex to an English mother and a French father.

She left school at 16, became famous at 21 as singer in Yazoo, and released her triple-platinum solo debut, Alf, at 23.

In the mid-80s she was famously known as the Basildon punk and the high priestess of electronic pop but she was later to develop into a soul singer of international repute.

Between 1984 and 1987, she was Britain's biggest female solo star. Covers of classics like 'That Ole Devil Called Love' and 'Love Letters 'confirmed her reputation as an interpreter of some of the greatest songs ever, while her own self-penned hits like 'Love Resurrection' and 'All Cried Out' confirmed her as gifted songwriter.

She has won Brit Awards, performed at Live Aid and toured extensively. But her wonderful voice was to take her beyond the world of pop.  As her music developed and flowered, she was becoming the artist she had always wanted to be and subsequently winning her first Grammy nomination.

In the past decade, Alison's career moved on and taken some different directions.  She has played Mama Morton in the West End hit musical, 'Chicago'; acted with Dawn French in the Kathy Burke-directed play 'Smaller'; narrated jazz documentaries for Jazz FM; reformed Yazoo with Vince Clarke for a triumphant reunion tour in 2008; and recently toured the UK as the guest of the Academy Award-winning French composer, Michel Le Grand.

Married to her second husband, David, with three children aged 24, 21 and 13, she is currently enjoying the legacy of her brilliant back catalogue whilst remaining wonderfully and warmly down-to-earth about it all.

Her latest album 'The Best Of Alison Moyet' is a true testament to the diversity of her terrific talents throughout her career, reminding us of the unique qualities of the singer we have always loved, and with whom we have grown older " and a woman who has never stopped evolving.