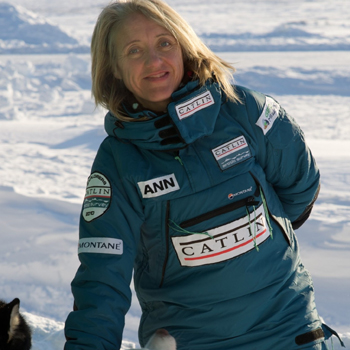 Polar Explorer Ann Daniels is one of Britain's leading female explorers and is among the very few people in the world who have walked to both the North and South Geographical poles.  She is a Polar Guide and has led 3 major scientific expeditions on the Arctic Ocean working with scientists to better understand the problems facing the fragile Arctic Ocean.
Her achievements have been recognised by many bodies including the Guinness book of records, The Pride of Britain Awards and the Women of the Year Awards.  She has earned the freedom of Yeovil town and has received an honorary degree from Exeter University.
Ann gives presentations on leadership, teamwork, motivation and environmental issues, tailoring every speech to her audience bringing out the key elements that are important to the event.
2011 Ann, together with American Tyler Fish led a four man team on the final Catlin Arctic survey to measure the thickness of the sea ice and study the thermohaline circulation of the ocean.
2010  Leader of the second Catlin Arctic survey ice team, following the 2009 expedition Ann successfully reached the North Pole after 60 days and 270 miles.  They manually drilled the ice up to 5 metres thick and collected water samples to assist scientists better understand the effects of Carbon Dioxide on the Arctic Ocean.
2009  Ann was navigator, path finder and head of ice operations for the Catlin Arctic survey.  The team, including Pen Hadow, measured the thickness of the ice covering the Arctic Ocean. Ann led from the front for 74 days over a 233 mile transect in the most extreme environment on earth.
2005  Solo expedition across the Arctic sea ice from the Russian pack ice.  Ann spent 21 days on the ice alone, had encounters with 5 polar bears and completed a 124 mile journey across the moving Arctic Ocean.
2004  Guided last degree expedition to the North Pole, where 15 captains of industry made a 60 mile journey across the sea ice to reach the North Pole safely.

2002  Ann put together and took part in the first female team in the world to ski to both poles. They endured temperatures as low as -50Âº and storms so severe they were unable to erect their tent, huddling together for 3 days. They suffered frostbite, back problems and carbon monoxide poisoning and one of the team had to be evacuated due to frostbite and wet gangrene.  Despite these setbacks they reached the pole triumphantly.

2001  Ann became the first British female North Pole guide.  She leads groups from varying backgrounds the last degree to the North and South Poles.  The most inhospitable environments in the world.

2000  Ann and four other women became the first all British women's team to reach the South Pole on foot.  Pulling sledges weighing over 140 lbs and navigating by the sun the team traveled 700 miles across Antarctica.