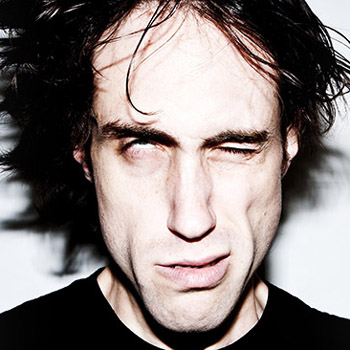 Beardyman is a musician renowned for his beatboxing skills and use of sophisticated music technology to loop and sample his vocals in front of an audience, creating sounds that amaze, confound and amuse.
In 2006 he was UK Beatbox Champion and held that title again in 2007.   Called the 'King of Sound and Ruler of Beats' by the BBC, Beardyman incorporates his own style of humour into his act.
He has impersonated Elvis, dressed as a monkey on stage at Bestival and once posed as an Austrian climate change lecturer, "Professor Bernhard Steinerhoff", before breaking into his set, with over 1 million views on YouTube.

Beardyman also features in the Funky Sage ring tones in which he plays a floating head who beatboxes and gives good advice. His video "Kitchen Diaries" which features him combining beatboxing with cooking has been viewed more than 4 million times on YouTube. "Kitchen Diaries" also makes an appearance in 'South Coast', a Brighton based documentary about Hip Hop in the UK.

Beardyman has something of a cult following, with many of his supporters sporting the phrase "Deus Ex Barba" - latin for "God out of beard". This is a reference to the phrase Deus Ex Machina.
Beardyman cites the Lyrebird as a form of inspiration and he has hosted a BBC Radio 4 documentary about the bird entitled, "Beardyman and the Mimics".

Beardyman supported Groove Armada on their UK tour in 2007.

In July 2009, he appeared at the Udderbelly during its residency at South Bank in London. This was for a ensemble comedy show called "Beardyman's Complete and Utter Shambles".  The show took the technology based entertainment experiments of Battlejam to a more theatrical comedy club setting. A reduced cast version of the show renamed "Beardyman's Unplanned Explosion" went on to appear at the Udderbelly at the Edinburgh Festival in late August 2009, and again at Bristol Old Vic in October 2009.
Beardyman brought his beatbox to a different audience when he appeared at the Royal Albert Hall.
Read More