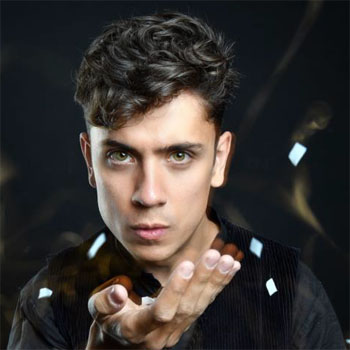 His performances are a dark, beautiful, baffling and wickedly funny treasure trove of impossible mysteries, visual alchemy, outrageous lies and brutal honesty. Magic shows just aren’t supposed to be this… real. Are they?

As a member of The Inner Magic Circle, Ben performs, writes and invents magic. Ben’s role as magic designer has seen him create special effects and impossible illusions for theatre, film and television.

Ben can also be found performing his astonishing magic at private parties and corporate events across the world, and has performed for royalty, celebrities, billionaires and heads of state, at just about every kind of event imaginable.

In Spring of 2019, Ben performed on the UK’s largest-rated ITV show, Britain’s Got Talent. In the first round, Ben transformed a piece of confetti into an egg, before cracking it into a glass, in front of the audience’s eyes. The trick gained him a standing ovation from the theatre audience mid way through his set, and he certainly worked his magic on the stunned Judges in his astonishing audition, which included teleporting a random audience member across the stage.

He is a perfect choice for corporate events.

“I felt hypnotized by your story telling”

“There is an other worldly air about you.. I hang onto your every word.. a joy to watch”

“You’re an act that works in Vegas and on TV”

“You are the living embodiment of magic”