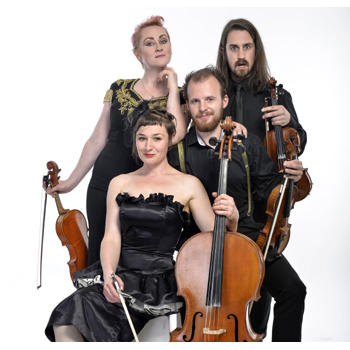 Bowjangles are a multifaceted music-comedy sketch group, made up of four classically trained musicians. Quirky, sexy, hilarious and completely unique, they offer an incredible eccentric Vaudeville style performance, like nothing you have seen before.

If you like music, song, dance and comedy, you will love Bowjangles. This multitalented four-piece not only play their instruments superbly; they also sing, they dance, they leap, tumble, juggle and joke, leaving their audience in stitches of laughter – and incredulous.

Bowjangles use every style and genre of music you can imagine in energetic and hilarious stage shows which takes string quartet performance to a whole new dimension, and brings old style Music Hall Vaudeville into the 21st century. Their shows hark back to the good old days of Music Hall Variety - when talent was truly multi-dimensional. You'd never have imagined that anyone could incorporate classical music and modern comedy quite so brilliantly.

Bowjangles are also available as a more traditional background string quartet The group’s after dinner show is an amalgamation of the best of their work over 10 years. The show includes song, dance, comedy and - where appropriate - audience participation, all accompanied by their flawlessly professional playing.

"You’d never have imagined that anyone could incorporate classical music and modern comedy quite so brilliantly." Performance Reviewed

"With the dancing, singing and fast pace it is easy to forget that they are playing all the music, all the time, without missing a beat"  Wiltshire Gazette and Herald