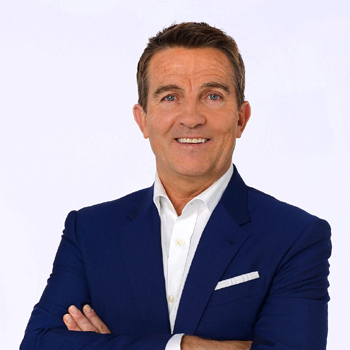 Actor and comedian Bradley Walsh took his first steps into the world of entertainment when he started as a bluecoat for Pontins Middleton Tower holiday park resort near Morecambe, Lancashire.

He became a household name when he played the lovable rogue Danny Baldwin in the UK's highest rating TV show, Coronation Street. Since leaving the street he has filmed an emotional three-part ITV drama entitled Torn, and has fulfilled one of his own ambitions: acting in Dickens costume drama Old Curiosity Shop alongside Sir Derek Jacobi. His current on screen persona is DS Ronnie Brooks from Law & Order: UK.

After his big break on his debut on The Royal Variety Show in 1993 he became a regular on Des O'Connor Tonight which in turn led to a series of sell out tours across the country as a stand up comedian. Bradley has also appeared as a guest on Parkinson and the Jonathan Ross Show.

As a presenter Bradley has hosted The National Lottery on BBC 1, The Chase and Odd One In on ITV, Big Stage on Channel 5, Shoot The Messenger on The Paramount Channel and Sports Addicts on Challenge TV.

He also had his own show on Capital Radio for two years, and hopes to return to radio when he has more time.

Bradley has the comedian's gift for observing the ordinary and making it funny. He is equally at home at the alternative Comedy Store and as a crowd pleaser in family entertainment. He was nominated for Best Actor in the National TV Awards in 2005, 2006 and 2007.

Most recently he is the host of the ITV quiz show The Chase, Keeping it in the Family and a stint on ITV's Nightly Show.