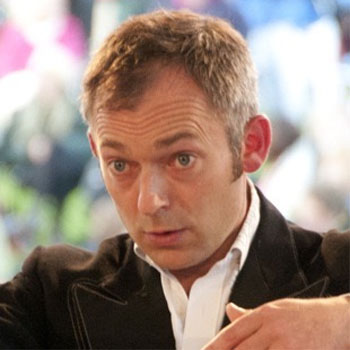 Charles Hazlewood is an international conductor and musical revolutionary.

He has conducted some of the greatest classical repertoire with some of the best orchestras in the world and is a significant presence on British television and radio.

He is the founder of the world’s first "Paraochestra" and his critically acclaimed
music theatre shows tour the world. His innovations have created new audiences for orchestral music and even reset what our concept of an ‘orchestra’ is.

Hazlewood is a visionary with a mission to bring the ever modern joy
of orchestral music to the 21st century audience and in doing so, to change
lives and communities for the better.

Charles has conducted some of the world's greatest orchestras. He has had a sell-out show in the West End, won the Berlin Film Festival Golden Bear with his South African opera company, has collaborated with some of the top names in the pop music industry, has authored and presented music on BBC television and radio, established the first orchestral alternative to Glastonbury festival and founded the British Paraorchestra, the UK's national orchestra for musicians with disability and the first paraorchestra in the world.
His primary and tireless mission is to bring orchestral music alive for new audiences and he is passionate about new musical work.
Charles regularly performs and delivers musical analyses with the BBC orchestras for Radio 3's 'Discovering Music' and his eclectic radio programme 'The Charles Hazlewood Show' on Radio 2, has won three Sony Radio Academy Awards. He has improvised with guests as diverse as Super Furry Animals, Scritti Politti, Billy Bragg, pianist Joanna MacGregor and the Guillemots.
In 2010, with members of his All Star band and period instrument orchestra, Army of Generals, Charles launched a project based on music from The Beggar's Opera. He created a similar event, Orchestra in a Field, in 2012 in the grounds of Glastonbury Abbey. The programme included Mussorgsky's Pictures At An Exhibition with improvised responses, Bizet's Carmen and Tchaikovsky's 1812 performed by the Scrapheap Orchestra (the subject of a BBC4 documentary in 2011). The festival also provided a platform for The British Paraorchestra.
2020 has been a real opportunity for people to rethink their lives during the Pandemic. For Charles, it has been a chance to double-down and scrutinise what he is here for, and how he might recalibrate, for a different-looking future.
Key to that has been learning to embrace his vulnerability - hasn’t the pandemic has proved how vulnerable we all are?! – and realising that wearing vulnerability on the outside is actually an opportunity to grow, and make greater art for the benefit of all.
This pandemic has brought about a new theme in Charle's speaking repertoire, one very fitting for today’s climate – "Dare to be Vulnerable". It looks at how being open about our human frailty rather than ‘manning up’ allows us to access so much more truth - and possibility.
An inspiring virtual performer.

“Normally when the speaker is wheeled in, it’s all very predictable and patronising.  However, Charles ran a 2 hour work shop that managed to get the group of over 20 global managers working together more positively - it was all we could talk about at dinner, evoking debate and conversation.”

“Charles Hazlewood is a dazzling speaker and performer. He engages and excites his audiences, and they catch his energy and intelligence so that the room is more upbeat and uplifted when he finishes. We’re big fans.”

“Simply inspirational. It’s very rare for a presenter to have the ability to make an audience laugh and cry in the same talk. Very moving and thought provoking. He managed to make it relevant to everyone in the audience, whatever their roles in the organisation”

“Charles was one of the highlights of Google Zeitgeist in 2013, and we’ve booked him for several events since. He got us laughing, crying and singing, all in the same hour. He was inspiring, funny and moving. He ‘hid’ a small orchestra in the audience, and it was an utterly magical moment when they started to play and the attendees realised they were there! Charles is always open to new ideas and feedback. He is a pleasure to work with: an all-round great guy.”