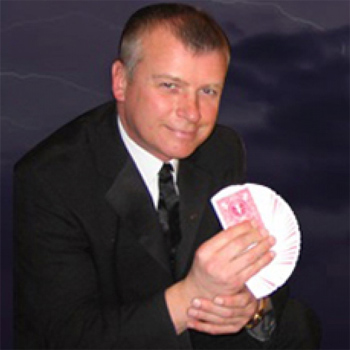 Chris Priest is a full time, professional close-up magician. He is the Millennium British Champion of close up magic, and the only magician to have been trained at the Royal Academy of Dramatic Art in London.
He has worked at prestigious hotels throughout the country, performed for TV and movie celebrities,  s Heads of State and members of the Royal Family. He has recently had the honor to be invited to perform his amazing magic for HM The Queen and invited dignitaries at Buckingham Palace.
Chris is very different from other close-up performers; he performs the most unbelievable and original close-up magic in his own unique style, which makes an entertaining experience you will never forget! It is this that sets him apart and has brought him total success.
He has earned the reputation of being one of the best magical entertainers in the business. ITV named Chris Priest as the best Close-up magician in the UK.
Besides working extensively throughout Britain, Chris has entertained corporate clients in America, Paris, Holland, Antigua, Portugal and Greece.
Chris is a founder member and performer of Spellbound, the world's premier team of close up magicians. He has been winner of the British Magical Championships, BMS Close-Up Magician of the Year and was named as the best Magician in the UK by ITV Television.