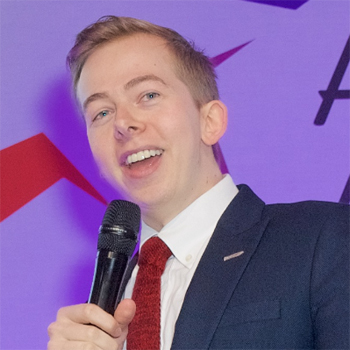 Don't be fooled by the fresh faced teen appearance, it hides a bright mind and razor sharp wit.
Chris's sharply written gags, assured stage presence and blisteringly quick improvised raps have established him as one of the best up-and-coming comics on the circuit.
His keen wit and intelligent wordplay have seen him rack up over a million views on YouTube; appear live on BBC Radio 2 and perform sold-out runs at the Edinburgh Festival Fringe, where in 2012 and 2015 he was shortlisted for Best Joke of the Fringe.
Chris regularly performs in comedy clubs the length and breadth of the country, as well as internationally, and is equally as assured as a feature act or an MC, skills he also brings to the corporate market. Currently dividing his time between LA and the UK, he made it to the live finals of Last Comic Standing in 2016.

Chris also does a double act with Mads Korsgaard looking at the psychology of creative thinking, with Chris providing prrof of Mads' theories. https://www.performingartistes.co.uk//artistes/madskorsgaardandchristurner

Just wanted to drop you a line to let you know Chris went down an absolute storm on Wednesday night (as I knew he would!).
Chris performed at an Exhibition Dinner in September 2017

"Thank you to Chris for his contribution to the ITM Conference.  It really was such a gorgeous way for us to start the event and he really made an impact.  I will always remember hearing the comment from one delegate as she left the room as ˜well, I wasn‘t expecting that‘¦! Chris is a delight to work with and I would not hesitate at all to recommend him to others."  MD, Rachel Ley Consultancy Ltd - May 2016
"Chris was absolutely brilliant on Friday - the guy is a genius!! He also has a lovely manner about him and was the ultimate professional. I've had so many e-mails and requests from people in the company to find out if he does any live gigs that they can attend. It's fair to say he was highlight of the event and we would certainly have back to do another event and highly recommend him to others."  Reapit Company Party - July 2015

"Chris made a great night even better. He was the star of the show, and I don't say that just for kindness. He really did play a main part in making the event five star quality. Everyone loved it (and he got a standing ovation)."  Event Manager, Dot Media for the Effective Mobile Marketing Awards - November 2014

AMAZING!!!!!! He was brilliant, everyone loved it! Thanks JJ!! Chris is unbelievable!!
Performed a free-style rap and closed with a rap about the event winners and nominees - October 2014
"Chris played an instrumental part of our Away Day. Cunningly, he was disguised as a potential new hire. It was only after a few hours that his identity was revealed as one of the country's foremost freestyle rappers.It was a game of two halves;  he hoodwinked my team for the first part of the day, and entertained them for the second half. Excellent. And unique."  A&R Edelman
"An excellent, entertaining and unpredictable after dinner show for our themed ball. The feedback I received after the evening was all incredibly positive with Chris Turner's Improv Hip-Hop being a real talking point throughout much of the evening and following days".
Captain D. Palmer REME; Second-in-Command B (Combat Systems) Company
Read More