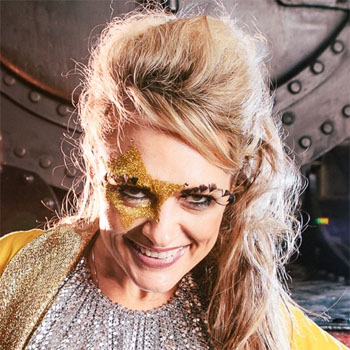 Chrissy Bray is a singer and MC who has risen from radio and television presenting in her native Australia to performing at world famous music festivals, sporting shows and corporate events across the globe.

Known for her brilliantly sharp off-the-cuff humour and powerful singing voice, Chrissy’s ever increasing fan base has seen her perform in the USA, Europe, Asia and Australia.

Now based in London, Chrissy has established herself as one of the UK’s most respected after dinner party hosts, combining her MC’ing talents with her vocal prowess to create memorable and hugely popular musical games nights for corporations looking for exceptional entertainment.

Chrissy’s effortless tongue-in-cheek sense of humour and impressive singing voice makes for the perfect combination for a night of highly immersive fun, however it is when she steps off the stage and turns the spotlight on the audience that her party creations shift beyond the usual corporate celebrations.

Each themed event is specifically structured so that instead of passively watching the entertainment, the audience actually becomes the entertainment. Chrissy expertly draws the audience into the heart of the action, ensuring everyone feels safe and relaxed to the point where people find themselves singing, dancing and participating in a passionate and carefree way that is simply unsurpassed.

It is this effortless audience engagement that sets Chrissy’s games nights apart. Audience members are invited to join together in teams and partake in a series of competitive rounds that bring people together to enhance connection and communication. The result is a brilliantly entertaining show that also offers a highly effective team building experience with positive long term effects in the work place. This is five star entertainment and team bonding at it’s show-stopping best.

Choose from the event themes below, or have a bespoke experience crafted especially for your occasion.

All I Want For Christmas

Back To The Future

"I think your events have transformed relationships between some people, it certainly cracked the ice with our global colleagues - it creates common bonds and stories which certainly helped to unite a group of people, many of whom hadn't met before. The benefits of that are ongoing and still clearly visible in day to day communication. We have done team building exercises involving outdoor activities, often these don't appeal to a certain group. The nice thing about your entertainment is that it appeals to nearly everyone and doesn't feel like explicit teambuilding."

"ChrissyBray’s event, 'James Bond Battle Royale' was an incredible show! People were enraptured with the whole experience, hands in the air and loving every minute of it. To say she knocked it out the park is an understatement."

"The feedback we have had verbally and on twitter has been unbelievable.”

"After attending an event in June I knew we had to have Chrissy entertaining our guests for our event, and I don’t regret that decision!  Chrissy was
fantastic throughout the night, I’ve never known our guests let their
inhibitions go so much as they did that night. She was professional and
entertaining – and has an excellent singing voice.  I would highly
recommend her for any event.”