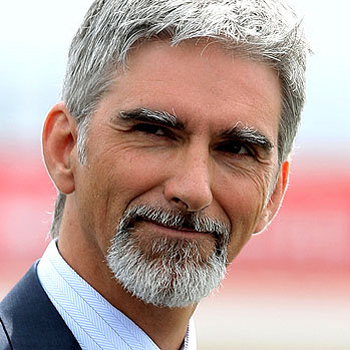 Damon came to professional motorsports relatively late: he began racing motorcycles in 1983 at the age of 23. The following year he won the 350 cc Clubman's cup at Brands Hatch. In 1985 he moved on to four-wheel single-seater racing with Team Van Diemen in the Formula Ford championship, before moving up into the UK Formula 3 championship in 1986. After three seasons in Formula 3, where he won four races, Damon then drove in the International Formula 3000 championship.

Damon started his Formula One career in 1992 with the Brabham team. He took the first of his 22 victories at the 1993 Hungarian Grand Prix for the Williams team the following year. In 1994, he won the British Grand Prix, a race his father had never won in his long and successful career. During the mid 1990s, Damon was Michael Schumacher's main rival for the Formula One Driver's Championship, finishing runner-up in the German's 1994 and 1995 title seasons.

Damon left Williams for 1997, despite taking eight victories and the world championship in 1996 - joining Arrows. He then went on to record the Jordan team's first ever win at the 1998 Belgian Grand Prix. He retired from the sport at the end of the 1999 season, after 122 race starts.

In 2006, Damon became president of the British Racing Drivers' Club, succeeding Sir Jackie Stewart OBE and is now a member of the Sky Sports F1 team.