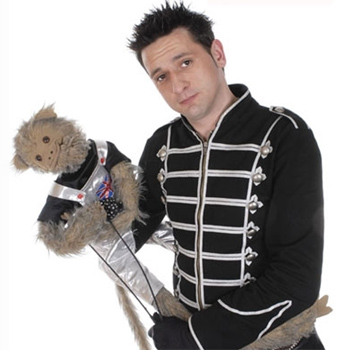 Damon's act has been performed in a number of countries across Europe and North America.
A gifted puppeteer, Damon wows and delights audiences of all ages and backgrounds with his hilarious mix of interacting with puppet characters. A talented singer in his own right, Damon adds musical impersonations, singing with the voices of well known pop artists, to many of the routines.
He is best known for is cute monkey Bubbles, adored by millions from his TV appearances, who sings and dances and wiggles his way through a Michael Jackson routine while Damon struggles to keep control. Bubbles literally comes to life in Damon's skilled hands.
This entertaining, funny act, is perfect for adding something memorable to an event or attracting PR attention and leaves audiences in fits of laughter.  The show is suitable for audiences both large and small, of almost any age, nationality and background and can be performed almost anywhere.
First runner-up in "Britain's Got Talent", Damon has performed alongside Joe Pasquale, Brian Conley and Richard Digance on "The Laughter Link Show". He has been on "Sunday Night Live at the London Palladium" and has appeared alongside Richard O'Brien and six finalists from "Stars In Their Eyes" in large charity event for Spring Centre (children with special needs).
Damon has appeared in hotels and clubs in Las Vegas and has supported Gene Pitney on his 2000 UK tour.
Accolades include being Winner of Best Speciality Act and overall winner of competition "UK National Final of the British Resort's Association 1999 and Winner of Best Speciality Act and audience vote overall winner "Southern Echo Star Trial" at the BICC, Bournemouth.
He has recorded and released 3 CDs with pop group En Masse and appeared on ITV's "Young, Gifted and Broke" as well as featuring in a BBC real life documentary entitled "The Monkey Man".
Read More