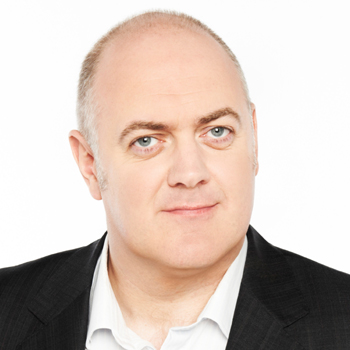 Dara started his career in television as a children’s presenter on RTÉ whilst performing his first stand-up gigs on the Irish comedy circuit, after studying at University College, Dublin, where he read Mathematical Physics.

Dara came to prominence in Ireland as host of topical panel show Don’t Feed the Gondolas. He had to leave the show midway through its fifth season in order to perform at the Adelaide and Melbourne comedy festivals.

Dara later co-founded the television production company Happy Endings Productions, whose most famous show in Ireland is The Panel. The show became one of the most talked about shows in Ireland and was twice nominated for the Best Entertainment Show IFTA (Irish Film and Television Award). His big break in UK television came in 2003 when he became host of BBC Two’s The Live Floor Show. This led to an appearance as guest – and, ultimately, four appearances as guest host of – the popular news quiz Have I Got News for You. By this time, he had moved to the UK and was working on the British circuit full-time.

Other notable television work sees Dara as an integral member of the Three Men in a Boat, alongside Griff Rhys Jones and Rory McGrath. In 2007 Dara fronted the BBC comedy interview programme Turn Back Time, and since 2011 has co-hosted BBC One’s astronomical show Stargazing Live alongside Professor Brian Cox.

Dara is also one of the most sought-after award show hosts in Britain, and regularly hosts the BAFTA Games Awards.

Dara tours regularly, and has performed shows all over world, from Moscow to Sydney, Tromsø to Malta, and has recorded five live DVDs for Universal Pictures. He also holds the record for the most appearances in a year for Dublin’s legendary Vicar Street. His previous shows include: Live at the Theatre Royal, Dara Ó Briain Talks Funny, This Is The Show, Craic Dealer, and Crowd Tickler.

Dara’s latest tour, Voice of Reason, has been performed across the globe, touring in the UK and Ireland, Scandinavia, mainland Europe, Australia and the Middle East. It was filmed by for the BBC in 2020 for a live stand up special that was broadcast on New Year’s Day.

Dara released the bestselling book Tickling The English in 2009, and more recently his non-fiction children’s book about space, Beyond The Sky, was nominated for Best Book with Facts at the 2018 Blue Peter Book Awards. In 2018 Dara wrote the follow up book, Secret Science – The Amazing World Beyond your Eyes, which was received with great critical acclaim. 2020 sees the release of Dara’s third children’s book Is There Anybody Out There, again with Scholastic.