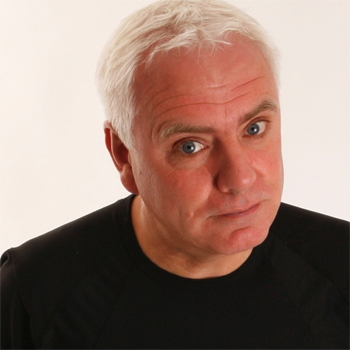 Dave Spikey is in great demand on the corporate circuit having first found fame as Jerry St Clair in Channel 4's comedy Phoenix Nights. He has mastered the art of making even the dreariest of subjects hilariously funny and creating hilarious stories out of seemingly mundane events. He glides seamlessly between the everyday and the surreal and has the rare gift of appealing to all types of audiences. He is an inherently funny man, incredibly versatile and there's something for everyone to identify with in his set.

If required, Dave finishes his own stand-up routine, and appears back onstage in character, decked in Jerry's white tuxedo to finish proceedings in true 'Phoenix Nights' fashion with a medley of Jerry's all time classic ditties (including classics such as 'Black Bin Bags' and 'Corned Beef'). Dave does this on his tour dates and the room always erupts when Jerry makes a guest appearance. It's a really dynamic finish to the show and a real treat for Phoenix Nights fans.

He completed two legs of his sell-out nationwide "Overnight Success" Tour in 2003 where he received standing ovations and rave reviews. Demand for tickets was phenomenal and some venues added second, and in some cases, third dates. In May of 2004, Dave performed another two sell out shows at the prestigious Lowry theatre. Dave's profile rocketed with the release of his first ever live stand-up video and DVD which was released in November 2003 and quickly achieved the Gold Retail Performance Award, selling over 75,000 copies.

He scooped the prestigious "Performance of the Year" at the Manchester Evening News Theatre Awards back in December 2003 for his "Overnight Success" Tour show and was awarded "Best Comedy Performance" at the Leicester Mercury Awards in January 2004. Here's a selection of press reviews on the show:

2005 got off to a great start, with the broadcast of "Dead Man Weds" starring Dave alongside Johnny Vegas.

"Dave Spikey is one of the most original, funniest men to have emerged in years"   The Stage

"Smart, unpretentious Stand-up with the co-star of Phoenix Nights"   The Guardian