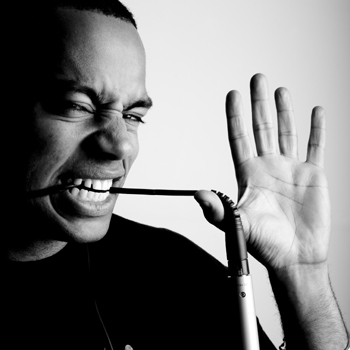 Ben 'Doc Brown' Smith emerged in the early 2000s as one of UK hip hop's most exciting and talented prospects.  Working with, among others, De La Soul and Mark Ronson, he spearheaded the emergence of British musicians in a niche so overly dominated by an American market.
In 2008, Doc was employed as a 'slang consultant' on Lenny Henry's Radio 4 sitcom, Rudy's Rare Records. His success in this role was such that several BBC producers and writers suggested he enter the world of comedy. 6 months later he found himself at the Edinburgh Festival, competing at the much celebrated So You Think Your Funny? competition.
Doc is a fascinating comedian with a repertoire which is fresh, original and, like his musical emergence, ground breaking. He adds comic raps to his humorous gags and anecdotes, covering everything from Britain's social and political backdrop, to his life before the limelight.
Since establishing himself as a favourite on the UK circuit, Doc has headlined at numerous comedy events around the world with his unique brand of rap-infused jokes and anecdotes. With further credits on Radio 4 programmes; comedy roles in Channel 4's The Inbetweeners and CBBC's Big Babies; and a transition into drama with Law and Order:UK, Doc has proved to be an extraordinarily talented and innovative all round entertainer.
A watershed moment arrived late in 2016 when Smith hosted the BAFTAs in Los Angeles, entertaining the likes of Samuel L Jackson, Tom Hanks, Jodie Foster, Jennifer Lawrence and more!
His first children’s book, the Walker/Candlewick-published I Am Bear has gone on sale worldwide and been an instant hit with critics and readers alike. The follow up, Bear Moves, was released in 2019.
A great choice for a fun end to the evening for your corporate event.
Read More