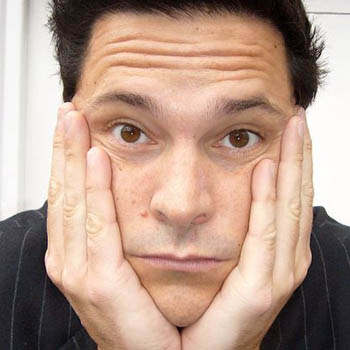 Dom Joly is a comedy legend. The comedian and journalist currently writes a monthly column for The Independent and regularly Tweets.
Dom Joly rose to fame in the late 1990s as the star of the Channel 4 show 'Trigger Happy TV' - a hidden camera show that initially ran for 2 series - Dom still keeps his famous mobile phone¦ as a toilet roll holder.
Following the success of 'Trigger Happy TV', Dom was hired by the British Broadcasting Corporation (BBC) to create a similar hidden camera TV show, called 'World Shut Your Mouth'. Like Trigger Happy TV, this proved to be another hilarious programme although it only lasted for one series of 7 episodes.
Dom then developed his spoof travel show, 'Dom Joly's Happy Hour' for Sky One which focused on Joly and friend travelling to discover the attitude towards drinking around the world.
In 2008, Dom Joly recorded a series for Channel Five called 'The Complainers'. In his own words, this series intends to try and get a little revenge for the ordinary Brit on the morons, bureaucrats, health and safety officers, traffic wardens, timewasters that make all our lives a daily hell.
The following year, Joly fronted a show titled 'Made in Britain' shown on the cable channel Blighty. In it he went on a road trip around the UK to discover what is still made there.
In 2011 Dom embarked on his first stand up tour entitled 'Welcome to Wherever I Am'.
Read More