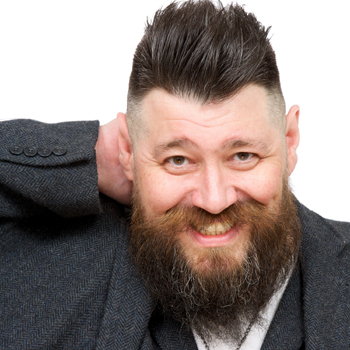 Doug Segal is an exciting entertainer combining comedy with amazing feats of mind reading and mind control. Described by Time Out as the UK’s best kept entertainment secret”, Doug won the Best Cabaret Act award at the Brighton Fringe in 2012, and the Three Weeks Editor’s Award at the Edinburgh Festival Fringe, also in 2012.

Doug performed his new show, I Can Make You Feel Good, at the 2016 Edinburgh Festival Fringe.

He has appeared on BBC One’s New Year’s Eve live show, alongside Natasha Kaplinsky and Claire Balding, which was seen by an audience of 9.5 million viewers. He has also appeared on Mischief (BBC Three) and The Slammer (CBBC). Doug predicted the results of the 2012 Olympics on BBC Scotland and was a regular guest on Holland’s highest rated chat show Jensen! on RTL5. Doug’s radio credits include The Comedy Club (BBC Radio 4 Extra) and MacAulay & Co (BBC Radio Scotland).

As well as appearing at the Edinburgh Festival Fringe, Brighton Fringe, Dave’s Leicester Comedy Festival and Glasgow International Comedy Festival, in 2014 Doug enjoyed a successful UK tour with his critically acclaimed show, I Can Make You A Mentalist.

I’ve hired Doug for two corporates & one private event and every single time it’s been unbelievable. The quality is fantastic, it’s entertaining & you really don’t know what’s going on inside your own mind”  Account Director, Accenture

"Thank you so much for a fantastic show, my staff just can’t stop talking about it! I’d have no hesitation in recommending your after dinner cabaret to anyone organising a conference”  Group Sales Manager, Clear Channel