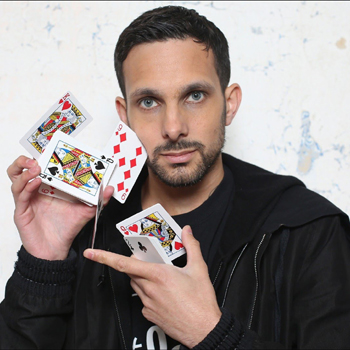 Growing up on the rundown Delph Hill housing estate in Bradford, with a father who spent large periods of time away in prison, Dynamo suffered with a debilitating form of Crohn's disease as a youngster.

Having been introduced to magic by his Grandad, the young Steven Frayne developed his skills as a means to fend off the bullies who teased him about his disease, quickly gaining a reputation as a unique talent within his local community with his incredible sleight of hand.

In 2004, after moving to London, Dynamo set out to fulfill stage one of his plan, the creation of the first ever magic tape. Along with a small team he filmed his performances on the streets of London and backstage at events, where he managed to blag his way in front of the stars by impressing the doormen and tour managers along the way.

Within a year he had footage with the likes of Ian Brown, Mike Skinner and Snoop Dogg, to name but a few. Posting these videos on YouTube, quickly gained Dynamo a following of fans and shot him into the spotlight.