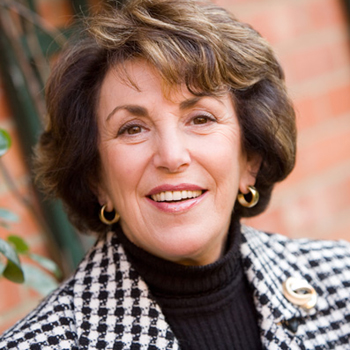 Edwina Currie is a former MP and is renowned for being an opinionated and outspoken public figure.

Born in Liverpool to Orthodox Jewish parents, she attended Oxford University to study Chemistry and gained an MA in Economic History from The London School of Economics.
In 1983, Edwina was elected as an MP for the Conservative party  making her one of only 23 female MPs out of a possible 656.
She has since forged a career as a broadcaster and writer. She has written a number of books, including Diaries, which revealed a four year affair with former PM, John Major

Edwina served in the Department of Health and became known for her campaigns on heart disease, women's cancer screening and the promotion of healthy lifestyles. Edwina was forced to resign in 1988 after she made the statement that "most of the egg production in this country, sadly, is now affected with salmonella". Egg sales quickly dropped and the comment caused outrage among farmers and egg producers. The controversy gained her the nickname 'Eggwina'.

In 1990, to make amends, she began The National Egg Awareness Campaign. In 2001 it was revealed that a covered-up report written shortly after her resignation found that there had been a "salmonella epidemic of considerable proportions.

Edwina lost her parliamentary seat in the 1997 general election and embarked on a career in broadcasting. She hosted the Radio 5 Live show, Late Night Currie from 1998-2003 and the ITV show Currie Night from 2002-2003.

In 2009, she sang on a charity cover version of 'Wake Me Up Before You Go Go' as part of Ant & Dec's Saturday Night Takeaway. The song reached number 64 in the UK charts.

She married her first husband, Ray Currie, in 1972; they had two daughters and were divorced in 1997. She married retired detective John Jones in 2001 whom she met when he was a guest on her radio show.

Edwina has made a number of diverse TV appearances including Wife Swap, Come Dine With Me,  Celebrity Mastermind (which she won) and Strictly Come Dancing.

She was described by BBC political correspondent Nick Assinder as "the most outspoken and sexually interested woman of her political generation."