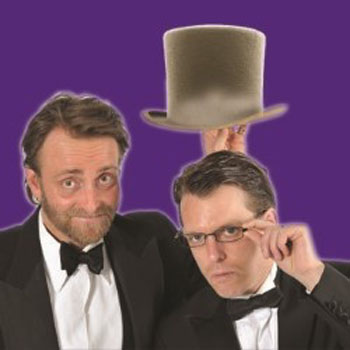 The Masters of 1950s and 1960s madness, mirth and total silliness are paid affectionate tribute to in this evening of their words and music. Michael Flanders and Donald Swann toured the globe bringing laughter and song to millions. Mud, Mud Glorious Mud (The Hippopotamus Song), The Gnu Song, Madeira M'dear, The Gasman Cometh, and many of their other songs have passed into legend along with their anarchic sense of humour, wordplay and fun.
In 2001 Tim FitzHigham and Duncan Walsh Atkins took to the stage in a theatre in Sussex to raise money for a small cottage hospital and Flanders and Swann - At the Drop of a Hippopotamus was born.
In 2003 the show played five summer music festivals and one show for an Earl. All shows sold out.
In 2004 the show completed its first tour of the UK and the album 'At the Drop of a Hippopotamus' was released as a limited edition. Both the shows and the album sold out.
In 2005 this show embarked on the largest Flanders and Swann tour since Flanders and Swann toured in the 1960s. The show played to the largest Flanders and Swann audiences since the great pair played The Theatre Royal, Haymarket in the 1950s. The album, At the drop of a Hippopotamus was re-released and again sold out. This tour finished with Tim and Duncan headlining at the International Flanders and Swann Festival in Donald Swann's House (in Battersea, naturally), where Duncan played the songs on Swann's piano and Tim drank madeira from Michael's famous decanter.
In 2006, the show completed it's fourth marathon UK tour, played the Edinburgh Festival at the Pleasance Theatre and a specially designed format of the show was developed for corporate audiences.
2007 saw another mammoth tour for the show, including dates in the UK and across Europe, a second successful run at the Edinburgh Festival, and many corporate bookings.
With generous support from the estates of Michael Flanders and Donald Swann 'At the Drop of a Hippopotamus' continues to go from strength to strength. As Michael was the first to suggest, their songs were - and are - not sung nearly enough. 'At the Drop of a Hippopotamus' is an attempt to redress this, and an attempt by Duncan's wife to re-dress him in a smart suit.
Read More

Flanders and Swann tribute in WMV