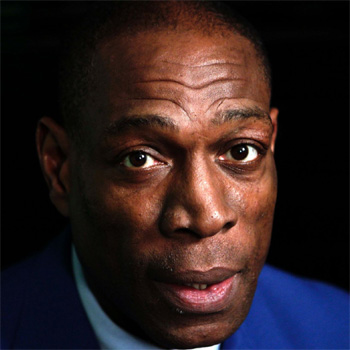 Frank Bruno is possibly the most popular boxer Britain has ever produced.  A loveable personality, he sprung to prominence during his interviews with BBC Television's Harry Carpenter.

Born in 1961, Frank had four attempts at winning the World Heavyweight Boxing Championship.  His first ended in defeat when he was beaten by Tim Witherspoon at Wembley.  Undeterred, he then challenged Mike Tyson in Las Vegas, but despite rocking Tyson, the evening was to end in disappointment for Bruno.

For many boxers that would have been the end of the road, but he was given another chance for a crack at the world title.  This time he met Britain's Lennox Lewis, and despite dominating the fight, Lewis ended up winning.  That appeared to be the end of the Frank Bruno story.  But proving that old adage that if at first you don't succeed, Frank was given one more chance.  In 1995, he succeeded with his lifelong dream when he beat Oliver McCall to become WBC Heavyweight Champion.

Bruno's reign as Champion lasted for six months, when once again he returned to Las Vegas to meet Mike Tyson, and once again the contest ended in victory for Tyson.  Frank Bruno's illustrious boxing career was over.

Frank Bruno continues to be one of the country's busiest celebrities working in television, radio and making personal appearances.