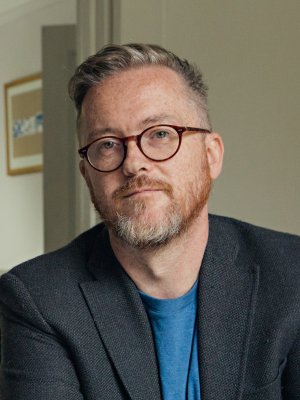 Geoff Lloyd is a radio and TV broadcaster best-known for his multi award-winning shows for Virgin/Absolute Radio where he worked for 18 years. Geoff’s time at Virgin/Absolute also saw him emerge as a podcast pioneer (the first daily show to be made available in podcast format from one of the major radio groups).

Geoff currently works at Universal Music Group as a podcast consultant. It is here he created Reasons to be Cheerful – one of the UK’s most popular podcasts, which he co-hosts with Ed Miliband.

Geoff's talk 'MR CHEERFUL - How My Podcast Adventure with Ed Miliband Turned Me Into An Optimist' explores the themes of podcasting and how guests, such as Rutger Bregman, have led him to think about the world and its future in a more hopeful way. Geoff leads the audience to think about and understand how we can apply resilience and optimism into our way of thinking, relationships, and workplaces in the post-COVID recovery.

Geoff often covers radio shows across the schedules of BBC Radio 5 Live, Radio 2 and 6Music, and his Beatles in Britain show for Sirius XM Radio is syndicated across the United States. Geoff has received numerous awards including two Sony Radio Academy Awards (gold); a European Radio Award; an Arqiva Commercial Radio Award; a British Press Guild Awards and the podcast of the year award from Pink News.