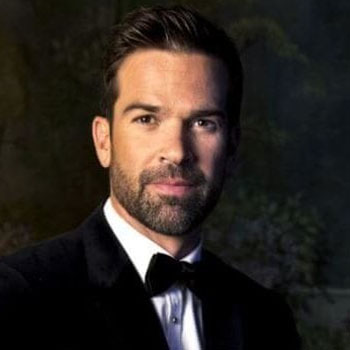 Gethin Jones is an acclaimed broadcaster and TV personality, who first burst onto our screens as a presenter for BBC’s Blue Peter. Since then, the talented presenter, violinist, pianist…(!) and also an accomplished sportsman has put his many talents to good use throughout his career.  From undertaking dangerous challenges, to charming on popular TV shows such as BBC Two’s Strictly: It Takes Two, Gethin is extremely versatile.

In a return to radio, Gethin is currently hosting his own radio breakfast show from 6am – 10am on the Bauer Network’s brand-new station, Hits Radio.

Gethin’s three and a half year run as a presenter on the longest running children’s show in the world, Blue Peter concreted his reputation as a talented and confident presenter. The show saw Gethin visit 31 countries, taking on the most extreme and obscure challenges of his life, from flying with the Red Arrows in a WW2 Spitfire to being attacked by an alligator in a Louisiana swamp. He also raced a horse at 40mph, skated the infamous Cresta Run in St Moritz, fought as a Samurai Warrior in Japan, and survived a life-threatening submarine escape training exercise. All these achievements aside, Gethin’s biggest moment was when he became the first ever civilian to finish the UK Royal Marine Commando 30 mile Yomp – finishing in a time of 8hrs 20mins.

Since leaving Blue Peter, Gethin has presented a vast range of formats from Gethin Jones’ Danger Hunters for Virgin1 and Police, Camera, Action for ITV1, to high energy quiz show Sell Me the Answer and prime-time ITV show, Holding Out For a Hero. Gethin also enjoyed a successful hosting on the red sofa for BBC One’s, The One Show and in 2017, Gethin fronted popular consumer show MoneyBite for Natwest. Following his success as a semi-finalist on Strictly Come Dancing, Gethin has also continued to be part of the BBC family, by securing a role alongside Zoe Ball as a presenter on Strictly Come Dancing: It Takes Two.

Gethin has ample live experience – he presented BBC’s Proms in the Park for two years as part of his partnership with BBC’s Last Night of the Proms coverage and fronted the Red Carpet Live for the Golden Globes. In 2018, Gethin became an integral member of the Pro 14 commentary team for Premier Sports and also fronted Channel 5’s first ever live fundraiser, Help The Animals at Christmas.

Along with his many TV and broadcast commitments Gethin has taken on ambassadorial roles for several popular brands. This has included being announced as the face of health retailer Holland & Barrett and as ambassador for Speedo in 2016 and 2017. Also in 2017, Gethin was announced as the brand ambassador for Welsh luxury jewellery brand, Clogau, a successful partnership that will continue until 2020.

As an ex professional rugby player, musician, keen adventurer and holder of a degree in Economics and Geography, Gethin appeals to a huge corporate market, lending his hosting abilities to multiple events throughout the year.

Gethin founded his own charitable foundation, Nai (Welsh for nephew), which was set up in honour for his autistic nephew, Alby. They fund seminars for parents and provide essential equipment to aid autistic children. Their ambition is to build a much-needed school for Autistic Children, in Wales.

Gethin is a popular choice for any corporate event.