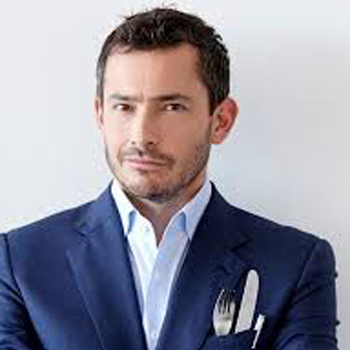 Giles Coren is an acclaimed writer, critic and television presenter.

He co-presented the six-part BBC2 documentary series Amazing Hotels: Life Beyond The Lobby in 2017.

A renowned columnist and restaurant critic , Giles writes for The Times and has written for many titles including the Independent on Sunday, Tatler and GQ magazine.  He was named Food and Drink Writer of the Year at the British Press Awards in 2005.  That same year his first novel, Winkler, was published.

He co-starred with Sue Perkins in Edwardian Supersize Me and The Supersizers Go series for the BBC.

He has also appeared in the BAFTA nominated series Back In Time - Back In Time for Dinner and Back in Time for Brixton, as well the eight part series Fake!The Great Masterpiece Challenge.

In 2016 he fronted the one-off, critically acclaimed documentary My Failed Novel for Sky Arts and then went on to host 500 Questions on ITV.

Giles is a popular choice for corporate events and appearances.