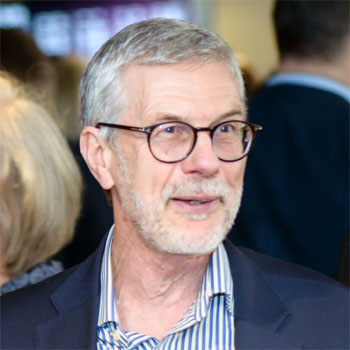 Graham is a former showbiz reporter and a seasoned after-dinner speaker who has been getting laughs in one way or another since compering comedy revues in his school days! He has over 30 years of interviewing TV, Pop and Hollywood stars.

These years of interviewing TV stars, pop stars and Hollywood glitterati have yielded amusing anecdotes from encounters with everyone from Eric Morecambe to Liz Hurley to Oprah Winfrey. The talks fuelled by these encounters – ‘Oprah Winfrey Touched My Elbow’ and its sequel, ‘Terry Wogan’s Hair Weave and Other Stories’ – have been delighting audiences around the UK since 2006. Great for light hearted corporate entertainment.

His latest talk, ’50 Shades of Graham’ has garnered rave reviews for its mix of wry and only slightly risqué humour and observation. This talk delves into the eternal battle of the sexes and those Men are from Mars, Women are from Venus moments – all broadly inspired by the phenomenal success of the notorious ‘50 Shades’ novels and films.

Funny, fast-paced and freshly-minted, Graham’s talk is proving just as big a hit as the previous two, performed more than 200 times across the UK.

As a freelance reporter Graham has written TV columns and celebrity interviews publications ranging from The Daily Telegraph and the Daily Express to the Guardian, along with TV Choice, TV Times, the TV magazines of the Sun and the Mirror, and women’s magazines Best and My Weekly. He also syndicated TV features to regional newspapers from Bristol to Belfast, Lincoln to Liverpool and Grantham to Glasgow, plus most places in-between.

Reviews for ’50 Shades of Graham’

“A fascinating talk which went down a storm – perfectly targeted at our audience.”

“The best laugh we’ve had in a long time.”

… and for ‘Oprah Winfrey Touched My Elbow’:

“We had the most wonderful time! The talk went by so fast – we were bewitched!”

“You are a great public speaker, articulate, funny, and your words gave the audience an interesting insight.