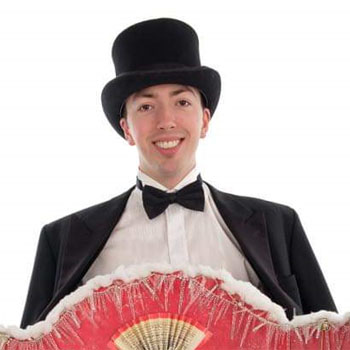 Jay Rawlings began his professional career at the tender age of 4 years old, when he appeared as part of his father's show, balanced on a chair on his father's chin!

Versatile and family friendly Jay has been lucky enough to perform at a huge variety of events worldwide. From corporate events, hotels, award shows and holiday parks. To entertaining the team of FC Basil in Austria, and being the first entertainer to perform for the British forces stationed in Brunei.

As well as appearing on many TV shows from the age of 4, Jay has performed for Dame Joan Collins and Sir ‪Cliff Richard in Barbados, is a regular at the Glastonbury Festival and featured in a national advertising campaign for Cadbury’s.

He creates a warm and friendly atmosphere guaranteed to leave his audience happily mystified and thoroughly entertained!

Take a unique mix of comedy, juggling and magic - add a dash of Jay’s infectious charm, and we have the modern face of variety!

Jay has trained extensively in the performing arts, and has launched a successful professional career of his own with highlights including:
As a walkabout magician, resplendent in tails, white gloves and carrying a miniature theatre, Jay will entertain and delight any audience with his enchanting theatre of magic and illusion.
His miniature theatre has been specially designed so that it's big enough to capture the attention of the audience but compact enough so Jay can perform safely in just about any walkabout situation.
It's a spellbinding performance as, from the back of the stage appear two hands, ten digits performing uncanny sleight-of-hand for the amusement and merriment of an intimate audience.
In May 2019 he broke a Guinness World Record for balancing 11 chairs on his chin!