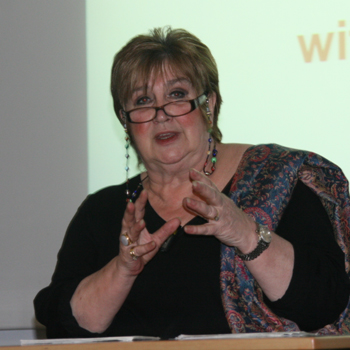 Jenni is one of radio and television's most respected broadcasters. As presenter of BBC Radio's Woman's  Hour, Jenni daily demonstrates her incredible range and depth and a unique ability to understand the feelings and complexities of those she interviews.

Her interviews with the powerful (PM's, Cabinet Ministers, Church and Business leaders and the Royal Family) are described as "probing"', "steely" and "no-nonsense" and her knowledge of the arts is matchless. Describing her work with people in tragic or difficult circumstances, one reviewer wrote of Jenni as "an interviewer who for sensitivity and pointfulness (sic) leaves most others far behind".
Her wide-ranging expertise in politics, business and the arts has led commentators to write admiringly of her "well stocked mind".

For Granada TV Jenni presented three series of This Sunday - a live look at issues across the entire religious spectrum. She has brought her wit and wisdom to a couple of episodes of the revamped Loose Women - Live Talk - for Granada TV .

In 1998-2000 she wrote a weekly column for The Express - a great forum for her wit and ideas, and written proof of her versatility and depth.

Away from page and broadcast Jenni is an accomplished conference facilitator and presenter - skilled at managing platform and audience with an incisive grasp of issues and impressive speaking skills.

In late 2006 Jenni anounced on air that she was about to undergo surgery for breast cancer but would returning to work in due course.

"Jenni was an absolute delight to work with and her lecture went down a storm with the attendees. She told anecdotes from her early life and Women's Hour which gave the topic a light touch, whilst also addressing issues important to our campaign such as women's equality and education."

Jenni spoke at the WEA annual Lecture at University College London, under the subject 'Women and Cultural Education - May 2013