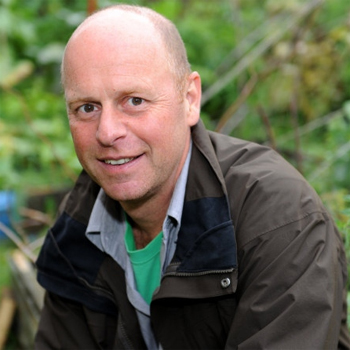 After leaving school Joe went to Art College and played bass in a band. He then travelled and worked abroad and upon his return started landscaping in North London and subsequently lived in Australia for a year landscaping in Sydney and Melbourne. He studied garden design at The English Gardening School based at the Chelsea Physic Garden in 1990 whilst simultaneously setting up a landscaping company.
Joe started presenting Gardeners World in 1998 and now designs gardens, presents on TV and writes.
He has also appeared in the BBC's coverage of Chelsea, Hampton Court, Blenheim and Tatton Flower shows.   Joe has fronted Open Gardens, Small Town Gardens and Garden Invaders  for the BBC and has been involved in the design of many gardens including the water garden at Kings Heath and The Bournville Garden.
His book The Plant Room was published in 2001 and in 2008 he published Joe's Urban Garden Handbook.  Joe also writes a regular gardening column for The Saturday times.
Joe is a father, a lifelong Arsenal fan, and surprisingly a keen but very average golfer. He is also involved in various charities.
Read More