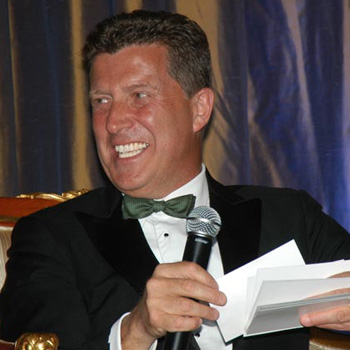 Born in Africa, Jonny loves game shows. Bob Barker on "The Price is Right" shares his top-hero billing with Chelsea football club's Peter Bonnetti. A single honours politics degree at the University of Durham, and a post-graduate course at the Academy of Live & Recorded Arts Drama School were all part of his master plan.

10 years treading the boards followed. It was fun, if rarely successful. "Sheena Queen of the Jungle" was described by Time Out as the "worst film in cinematography history," yet Jonny still managed to be edited out of the final cut! With debt and bartending now dominating his career, a chance introduction in 1994 set him off on a whole new path.

His two years as the presenter/coordinator of Cable 17 Sport proved the big break for him. Going freelance in 1996 he presented sport on ITV Carlton's London Tonight, before launching his love-affair with Five TV. As well as presenting Five's Major League Baseball programme, Jonny has also fronted up other Five TV shows, including Live and Dangerous, Boxing Classics, Sir Steve Redgrave's Golden Five Golf Tour and the Laureus World Sport Awards.

Jonny has also written a weekly baseball column in the Daily Mirror, done extensive corporate work as a presenter and facilitator, and been a horse-race commentator and auctioneer. He is unsurpassed as a humorous raiser of funds at charity auctions.