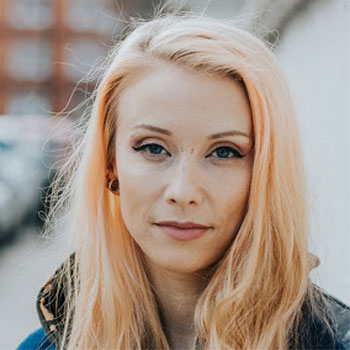 Julia Hardy is an experienced TV Presenter, writer, radio presenter and live host, specialising in technology, video games and YouTube. Her years of experience in front of the camera, teamed with her depth of knowledge and lively personalty makes her a fantastic choice for hosting live corporate events, from Awards Ceremonies to Product Launches. She is an experienced host of both conferences and awards and has given keynote speeches.

Beyond this, Julia hosted Radio 1’s first ever video game themed radio show in December 2016 and also, more recently, was heard depping on the main station over Christmas 2017.

Julia is a tech fanatic as well, having previously been Sky News Sunrise’s go-to expert on the subject for well over a year. She loves to play with new tech and has a huge passion for what the future holds for us in this arena. She recently hosted a Dr Who themed BBC Live Lesson, which aimed to help teach children across the country some difficult tech theory in a lighthearted way.

Last year Julia produced a Radio One Stories documentary called ‘Rockstar Gamers’ which looked at the new wave of youth making careers out of playing video games for a living. The hour-long documentary was one of the most popular that Radio One has ever seen.

Julia has also worked for Jamal Edwards’ successful YouTube channel SBTV for the past 2 years, producing and presenting their games and gadgets content. Her team’s content engages a very tech savvy young audience, as well as working with large brands to produce advertorial content.

One of the other things Julia is most passionate about is affecting change for women. She has a blog called Misogyny Monday, which holds a sharp-tongued mirror up to the abuse that women receive online. Having just returned from Canada where she delivered a Tedx talk on misogyny to 1300 people, Julia was able to bring her inimitable humour to what is a very touchy and difficult subject to approach.

She is passionate about supporting women getting into the industry, helping to host the Women in Games Awards this year and sitting on a host of panels aimed at getting women into technology and gaming.

Julia is also a keen advocate for Human Rights having lived in a Burmese refugee camp for a year and in 2016 gave up alcohol for 365 days to raise money for Amnesty International.

“Julia is a pleasure to deal with. During every stage of our events she shows the upmost professionalism and has a great level of industry knowledge” – E Sports Industry Awards

“I’ve had the pleasure of working with Julia Hardy for many years. She’s highly passionate about games, entertainment and media. She’s hosted a company conference for the whole of our European team. No easy task to entertain 1000 people but Julia did it with grace and kept everyone entertained. Extremely easy to work with Julia is someone you can always rely on to bring enthusiasm and passion to a project.” – Sony Interactive Entertainment UK Limited