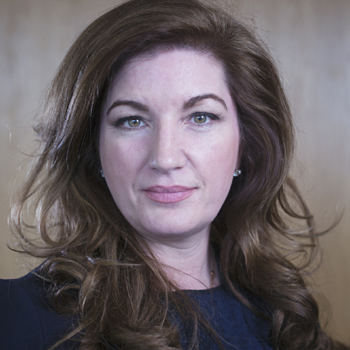 [Photo courtesy of Woman & Home - Liz McAulay]
Karren Brady began her career at LBC when she was 18 years old and moved swiftly onto Saatchi & Saatchi as an Account Handler. She joined Sport Newspapers in 1988 and became a Director within a year.
Karren was known as the first woman when she became Managing Director of Birmingham City Football Club in 1993, and turned the club's fortunes around. She took over Birmingham City when it was in liquidation, and in her first year at the helm, the club recorded a financial trading profit. In 1996 the club made an overall profit for the first time in modern history and in February 1997 the club launched on the stock market valued at the time of float at £25,000,000 and she was the youngest Managing Director of a PLC in the UK.
Karren increased the average gate of the club from 6,000 to over 25,000 and has made many constructive changes at Birmingham City Football Club and her community projects; such as 'Kids for a Quid' scheme, the Family Stand, the Community Classroom and other similar initiatives have been emulated and copied elsewhere. The club now offers the most comprehensive range of services from Financial to Personal (mortgages, insurance, loans, credit cards, petrol cards, savings accounts, training services and funerals).. It was successfully sold in 2009 to Far East investors.
Karren attracted much media attention as the highest placed woman in football and was the subject of an hour long documentary 'Inside Story - The Real Life Manageress' shown on BBC1. She has also hosted her own TV show, 'Brady Bunch' and presented both 'Loose Women' and 'Live Talk' on ITV.
In 2006 she survived brain surgery and was back at work firing on all cylinders shortly afterwards. In 2007 she took part in Comic Relief does the Apprentice, and led the winning female team.
In 2009 it was announced she would be Sir Alan Sugar's new right hand woman in The Apprentice from 2010.
Since the takeover of West Ham by David Gold and David Sullivan in early 2010, Karren became vice chairman of the club. She is also a England  2018 Board Member, a non executive director of Mothercare, chairman of Kerrang! and non executive director of Sport England.
She is regularly featured in the news, on TV and radio. Karren has written three books; a factual account of her first season at Birmingham City and two novels; 'Trophy Wives' and 'United' and has written for numerous newspapers and magazines.
In August 2014 she was appointed a member of the House of Lords.
We were delighted that you were able to engage the audience so well and your inspirational story was the perfect way for us to end the three days.
BCSC on Karren Brady who spoke at their Shopping Centre Management Conference
Read More