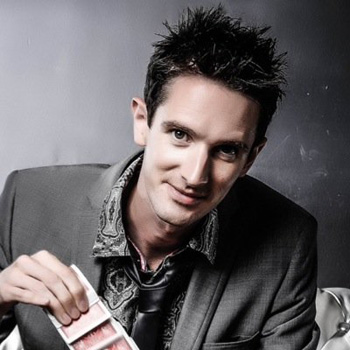 Keelan Leyser is one of the world’s top quick change artists, magicians and illusionists, having performed in over 60 countries for some of the most prestigious companies, television companies and events.

He has performed in over 100 television shows worldwide and a documentary was made about him by BBC1 called ‘The Magical World of Keelan Leyser’. It was voted Best Children’s programme by the Daily Mail. He was also in a series called ‘Playing Tricks’ as part of a double act with Rich Reed.

For TF1 in France he performed in ‘The Best’, and in the USA he filmed a performance in Hollywood for the award winning TV series Masters of Illusion. On TV in China he performed for Chinese New Year live in front of 110 million people.

His latest speciality is iPad magic. Keelan Leyser is the only real iPad Magician in the UK and one of the very few worldwide that does more then a few simple tricks. Keelan’s iPad Magic is unique to him and him alone. His effects are all created by Keelan himself. In this day and age of Virtual Events he is a great choice for clients and their teams!

Keelan has been doing online shows for corporate clients. He has performed his shows to as little as 8 or 9 people all the way up to 1000. Keelan has built up some tried and tested technique to keep everyone alert and engaged even if they aren't actively participating.

The show is extremely interactive in nature as Keelan tries to involve as many of the participants as possible. Spectators minds are read through the screen in truly impossible ways and of course he still includes elements of his signature digital magic to the mix!

"Thank you guys so much- that was fantastic! Everyone loved it. Really made my day too! Thank you for being so accommodating and putting on such an awesome show.  Please keep in touch- would love to come to an in person show when things are back up and running!"
Monkeypaw Productions, USA

"Thank you so much for today, it was fantastic!  Everyone loved it and the feedback has all been very positive – it did exactly what the CEO wanted which was to get everyone to switch up how they were thinking before a development session. Hopefully we can sort a social for more co-workers with you soon."
Triodos Bank UK