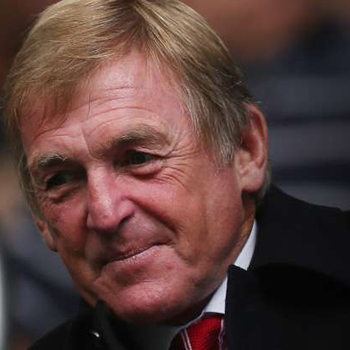 Considered by many to be the greatest player in Liverpool history Dalglish gloriously displayed that priceless quality of performing as a brilliant individual within a team framework. "His genius is not only in his own ability but in making others play", proclaimed Bob Paisley, the manager who signed him from Celtic for £440,000 in August 1977.

With Kevin Keegan having departed to Hamburg, the capture of Dalglish as his replacement must rank as one of football's shrewdest pieces of business.

'King Kenny' swiftly became a Kop hero and his late partnership with Ian Rush was perhaps the finest ever seen in England.

Dalglish's majestic play was blessed with a creative vision and icy coolness only the true legends of the game possess. His 1978 European Cup winning goal against Bruges at Wembley - one of 172 he scored for the club in more than 500 appearances - was a supreme example of how he could 'freeze' play before delivering a deadly finish.

With Ray Clemence, Alan Hansen, Graeme Souness and Billy Liddell he was voted into the BBC Merseyside Team of the 20th Century and he was awarded an MBE.

If Kenny Dalglish had simply played football for Liverpool he would be an Anfield hero. However, the fact that he managed the club to even greater success guarantees him the status of a legend.

After eight brilliant years as a player he was asked in 1985 to combine his work on and off the pitch to become LiverpoolÂ¹s first player/manager. It was an inspired choice. In the space of five years he was voted 'Manager of the Year' three times and led Liverpool to a League and FA Cup double in 1986 and further championships in 1988 and 1990.

He was responsible for signing some fine players including John Barnes, Peter Beardsley and a young Jamie Redknapp. One of his great moves was to make the brilliant defender Alan Hansen his captain.  Alan rewarded Dalglish's faith and turned in some of his finest performances under Kenny.

The terrible, shattering events at Hillsborough on 15 April 1989, spelt the end of Dalglish's time with the club, and indeed for a time, with football. Dalglish and his squad spent countless hours trying to find ways to bring comfort to the bereaved and traumatised, but eventually if proved too much for him. He suddenly resigned in 1991, after admitting that the strain and emotional distress of the Hillsborough tragedy had made him feel like his 'head would explode'.

The effect on Merseyside was only equalled by the similarly surprise retirement of Bill Shankly. Whilst few would dispute his reasons, there was dismay that one of the great periods in the Club's history was closing: For the fans player/manager Dalglish had taken them on a wonderful, joyous ride through the League and the passion he engendered was equalled only by Shankly.