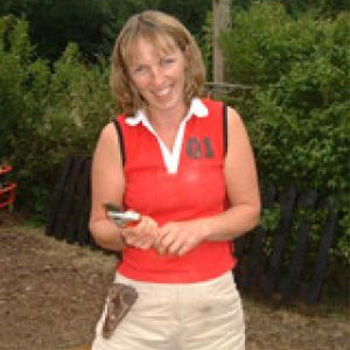 A key member of the Ground Force team, Kirsty King started as the horticultural researcher on the show and is now one of the four presenters.

She was raised in Perthshire, Scotland, and became interested in gardening in her early teens. At eighteen she moved down south to study horticulture at Writtle Agricultural College in Chelmsford, Essex. After graduating, Kirsty worked for a landscaping company in East Sussex for two years. Her work involved running a team of landscapers, building show-home gardens, and designing private gardens as well as general garden maintenance.

Her life changed when she met the executive producer of Ground Force in 1997. Kirsty was offered the position of horticultural researcher on this new show, rising to become associate producer, and she has been part of the team ever since. Her role is to oversee and buy all the materials and plants for the show. Then after Alan Titchmarsh's departure in 2002, Kirsty emerged from behind the cameras, and since that time she has co-presented 26 half hour episodes and three hour long specials. She says: 'It feels very strange, but Charlie, Tommy and Will have made it so much easier. Having been part of Ground Force since day one, it's nice to now be part of the jokes, rather than having the director shouting at me to be quiet!'

The highlight of Kirsty's time on Ground Force so far was transforming Nelson Mandela's garden in South Africa. 'I got to drive for two days through South Africa watching the wildlife and plants change,' she remembers, 'I had a great guide to learn from, and got to meet an amazing man in an incredible country. How can you top that as the first trip abroad with the show?'

She has also made 14 programmes of Ground Force America for BBC America, which were also shown on BBC1.

Kirsty has written a regular gardening column for the Saturday edition of the Daily Mail and also for the Daily Record from January to June 2004.

Kirsty is married and has two daughters. One of Kirsty's main passions in life is motorbikes, but she also likes to play squash and hockey, and enjoys horse riding. She is also a qualified ski instructor.