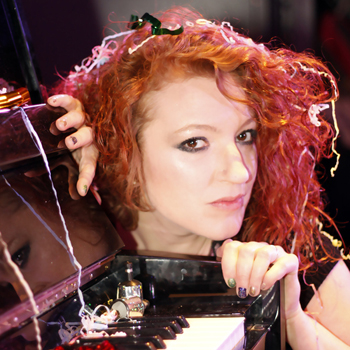 From a half-hour set of music to a musical comedy cabaret after a meal, Kirsty can either sing and perform some of her original comedy songs on the piano, belt out some classic pop and rock tunes or even (with a little advance notice) write a charming and/or funny song to order, all the event itself or any particular individuals, to really enhance and personalise the occasion.

For a more complete evening’s entertainment, Kirsty's signature cult show Kirsty’s Poptastic Piano Singalong” can form the basis for a longer ‘party’ event – the audience can choose from a list of over 750 songs for some live, interactive and hugely fun, en-masse karaoke. Kirsty has the ability to play pretty much any pop song from the past 50 years by ear. Lyrics are displayed on a large screen for the whole room to join in as Kirsty plays, directs and hosts the festivities.

Smaller groups can opt to have a guest-microphone” where individuals are invited to get up and sing and even win an array of special prizes”.

Alternatively, Kirsty is able to provide fabulous background music on piano and vocals from her extensive repertoire throughout the evening; from gentle ballads to more upbeat songs. A full band is also available for a bigger party atmosphere and dancing.

Kirsty performed her debut solo musical comedy show Life Begins At Party” at the Edinburgh Fringe 2016 and has been working with top comedians for more than a decade, combining her musical talent and wit for dozens of acts including Arthur Smith, Rich Hall, Mitch Benn and Charlie Baker among many others. She is also a regular with The Comedy Store Players. She co-hosts and runs London’s premiere musical comedy night The Distraction Club" and is also in great demand as a solo performer for festivals and private events.