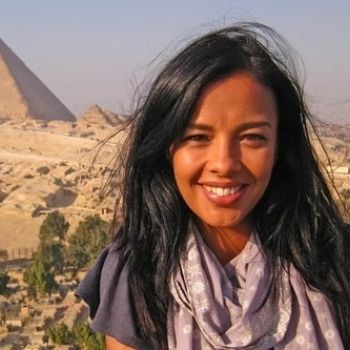 Liz Bonnin studied biochemistry at Trinity College, Dublin. She later completed a Masters in wild animal biology with the Royal Veterinary College and Zoological Society of London and went on from this to become a well known and loved presenter of science and natural history programmes.

She has now presented over 40 primetime programmes including Blue Planet Live, Super Smart Animals, Galapagos and Horizon. With her recent landmark BBC One documentary Drowning in Plastic, she expanded her skill set to include more hard hitting environmental reporting as she investigated the ocean plastic crisis and raised the level of public debate on this important topic.

Liz’s route into science and wildlife presenting was certainly not a premeditated one. After university she took a year out to travel and sing in a band and ended up presenting the IRMA Music Awards for RTÉ in Ireland. One thing led to another and Liz continued her stint as an entertainment presenter, moving to London to present Channel 4’s breakfast show RI:SE and BBC One’s cult music show Top Of The Pops. But she also got the chance to film a documentary about tigers in Pench National Park in India, and this experience led her to put the brakes on entertainment programming and return to her first love, science, with a view to communicating her passion on screen, should the chance arise.

Liz was hired by the BBC to present Bang Goes the Theory, BBC One’s popular science magazine show, which aired for eight series. Since then, Liz has worked on various science and natural history programmes, including BBC Two’s Museum Of Life, a series about the Natural History Museum in London; BBC Two’s Horizon, presenting specials on The Transit Of Venus and Tomorrow’s World where she delved into the latest science and technology set to transform the planet, and Animals In Love for BBC One, which saw her travel the globe to investigate the science of animal behaviour, cognition and emotional intelligence.

Liz’s other work has included Operation Snow Tiger, a series on Amur tigers for BBC Two, tracking the world’s largest big cat during the harsh winter of the Russian Far East, and BAFTA award-winning Big Blue Live for BBC One and PBS in the USA, a marine wildlife extravaganza in which humpbacks, great white sharks and blue whales, amongst other animals, were filmed Live. Liz also presented the award winning Galapagos for BBC One, a three part series which saw Liz join a team of scientists carrying out groundbreaking research and undertake her first submersible dive to 1km beneath the waves, the deepest anyone had gone on the archipelago.

She continues to communicate science and natural history on television because she is passionate about reawakening the public’s curiosity about the world around them. She loves to challenge herself and continue to push the boundaries of how stories are told, to that end.