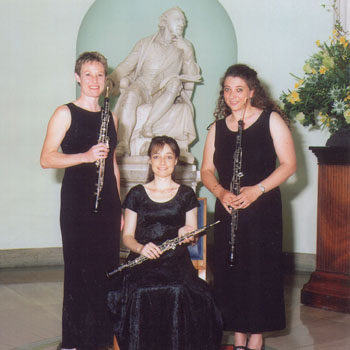 The combination of two oboes and a cor Anglais provides a wealth of musical material. Their repertoire spans four centuries, encompassing works from Bach, Handel and Beethoven through George Gershwin and Stephen Sondheim to contemporary commissions. Many of the pieces they play have been specially composed or arranged for the trio.

The trio has recently played at the Banqueting House, Whitehall, The Savoy Hotel, the Royal Academy of Arts and at the Guildhall, London in the presence of the Lord Mayor of London. They have also provided foyer music for the Royal Festival Hall, the Barbican Centre, The Royal National Theatre and for the Wigmore Hall's annual "Christmas Cracker", and taken part in the Covent Garden Street Festival.