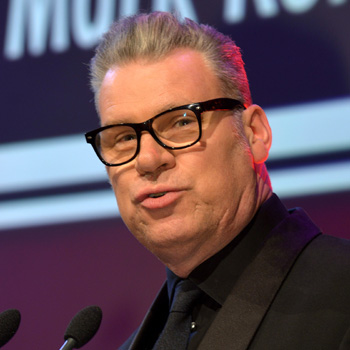 Outspoken, opinionated and never lost for words, Mark Kermode is the UK’s best known and most trusted film critic.

He is the resident film reviewer for The Observer; for BBC Radio 5 Live’s Sony award-winning Kermode and Mayo’s Film Review; for the BBC News Channel’s Review Show and for BBC2’s Culture Show. Additionally, Mark hosts a film soundtrack show on Scala Radio on Saturdays. On his ground-breaking Kermode Uncut Blog he airs his personal views on what most fires him up about cinema, and invites viewers to give their own opinions.

Audiences have been delighted by the trademark passionate rants about films that have earned him his cult following in print, broadcast and online.

Mark Kermode began his career in film journalism and broadcasting in the 1980s after studying English at Manchester University, where he wrote his PhD thesis on horror fiction. He began working for magazines such as City Life, Time Out, Fangoria and the NME. Currently he is a contributing editor to Sight & Sound.

After a spell at BBC Radio 1, he presented Channel 4’s ‘Extreme Cinema’ strand. He has written and presented numerous documentaries for both Channel 4 and the BBC, including In Search of the Blair Witch, On the Edge of Blade Runner, Fear of God: 25 Years of the Exorcist and Poughkeepsie Shuffle: Tracing the French Connection.

Mark plays bass in skiffle band the Dodge Brothers. Their second CD, The Sun Set, was recorded in Sun Studios (where Elvis made his first albums) and was released in May 2013. The Dodge Brothers regularly team up with Neil Brand to accompany classic silent movies with newly composed scores.

With his wife Professor Linda Ruth Williams, Mark curates the Shetland Film Festival and regular seasons at the Bfi.

Mark has published monographs on The Shawshank Redemption, The Exorcist and Silent Running.

He regularly does sell-out tours of the UK with film-related stand-up shows.