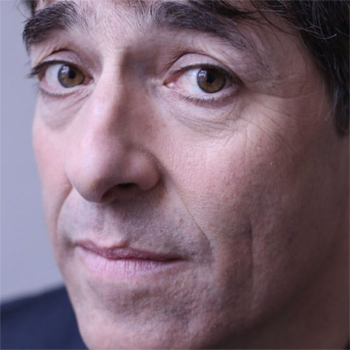 Mark started doing stand-up in 1982, around the circuit of bizarre gigs, going on after jugglers and escapologists and people that banged nails into their ear. Then came the Comedy Store and Jongleurs and getting bottled off at The Tunnel, and then a regular slot on Radio 4's Loose Ends, where he met Joseph Heller, Christopher Lee and Gary Glitter.
He did four series of The Mark Steel Solution, one for Radio 5 and the others on BBC Radio 4, and a radio series about cricket, which provoked a whole page of fury in the Daily Express. He presented three series of a sports programme called Extra Time which he was very proud of, especially as it went out on Tuesday nights on Radio 5 to possibly no listeners whatsoever. Then there were four series of the lectures on Radio 4, a book called It's Not a Runner Bean, another one called Reasons to be Cheerful, and 3 television series of the lectures on BBC 4 and BBC 2.
His current Radio 4 comedy programme "Mark Steel Comes To Town" sees him travel the country, discussing the quirks of the town he's in that night.
He has done weekly columns in Socialist Worker, The Guardian and The Independent. There was a book called Vive le Revolution, and he's been on various panel shows like Have I Got News For You and QI, and on Room 101, and on Question Time he got very confused when he insulted a member of the Tory shadow cabinet, who afterwards said he was splendid and invited him for a drink.
And he's spoken at lots of demonstrations and union meetings and protests, and appeared at quite a few benefits, and yet capitalism still seems to rule the world - maybe he's the jinx!
"Mark Steel was very entertaining thanks. We loved the fact that he made it so relevant to our industry."  Mark gave the after dinner speech at the British Coatings Federation Annual Dinner - May 2013
Mark was brilliant, we have had nothing but positive comments... He appeared to have genuine empathy for the candidates and their achievements and was also extremely funny....I would have no problems recommending him, he exceeded my expectations which were pretty high." Mark hosted an awards for Pro Skills November 2009
Read More