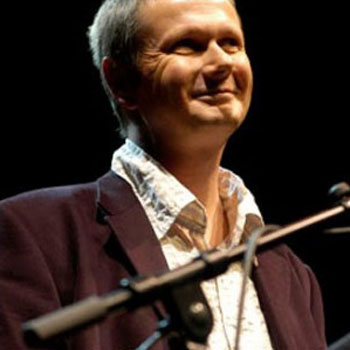 Regularly voted 'pick of the week' for his on-the-spot poetry for Saturday Live on Radio 4, Matt is a poet, humorist, and enemy of all that's difficult and upsetting.
He engages audiences with perceptive observation, playing with words, rhymes and rhythm - his themes ranging from the lightweight (a screw, kippers, stolen paperclips) to the more weighty (worry, indolence, love,  stolen laptops). His pace varies from quiet and slow, to modern rap, to startling velocity and tongue twisters.  All Matt's performances are tailored to audience and client requirements and invite participation.
By blending self-deprecating irony with wit and seriousness, he is whimsical, affectionate, and topical and above all, funny.
Matt has been a mainstay on Radio 4's award winning Saturday Live since it began in 2006, and also has his own Radio 4 Show: 'The Wondermentalist Cabaret', a comedy-infused, musically enhanced, party of poetry.
Matt's radio career started with Radio 4's 'One Night Stanza' in 2001 and he has been featured on Pick of the Week at least once every year since then.  He has made innumerable radio appearances, including Off the Page, Adventures in Poetry, A Good Read, The Verb, and as guest presenter of Word of Mouth, and has written and presented several documentaries for Radio 4, as well as various short films for BBC's Inside Out strand.
In 2010 he was the first official Poet in Residence for the Wimbledon Tennis Championships and his work was heard and read in five continents.
He writes regularly for The Guardian, and his books include best seller 'Standing Up To Be Counted Out', 'The Hole in the Sum of my Parts', 'Where Earwigs Dare'; and 'Shopping With Dad' which was translated into various different languages and made into a CBBC film. His latest book is 'Mindless Body, Spineless Mind.'
Matt is equally at home at a mental health conference, a literary festival, a prison, or working with inner city school kids, as he is performing to a hall of several thousand business delegates.  He is a people-person who enjoys interacting with people of every background.
Matt has appeared alongside poets as diverse as Carol Ann Duffy and Pam Ayres, Simon Armitage and John Cooper Clarke, he's a regular at the Edinburgh Festival.
Also in demand as a lyricist, his 'Songbook of Unsingable Songs' produced with composer Stephen Deazley, has received 5 star reviews. His 'A Little Book of Monsters' has toured music festivals and 'The Same Flame', with Thomas Hewitt Jones, is being orchestrated for performance at Carnegie Hall in 2013.
Read More