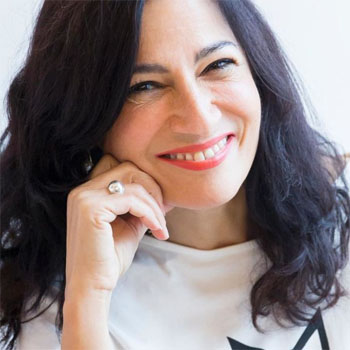 Safia Minney MBE, FRSA is Founder and Director of People Tree, the pioneering Fair Trade and sustainable fashion and lifestyle brand. She developed the first organic and Fair Trade clothing supply chain and is recognised by the World Economic Forum as an Outstanding Social Entrepreneur.

Safia's work draws on years of experience from her time in publishing from the age of 17. At Creative Review she led a Marketing and PR team. Safia then started a marketing agency working with Advertising Age and specialised in arts, political and green publications and environmental organisations like the New Statesman and Friends of the Earth.

At the age of 25 Safia went to Japan where she learnt Japanese and worked for The Body Shop and started Global Village and People Tree.

Safia has been recognised and won lots of awards, but even an MBE doesn’t get you a seat on the Northern Line in rush hour!

In 2006 Safia was recognised by the World Economic Foundation, Schwab Foundation as one of the world’s outstanding social entrepreneurs, she was awarded Social Entrepreneur of The Year in the Edge Upstart Awards.