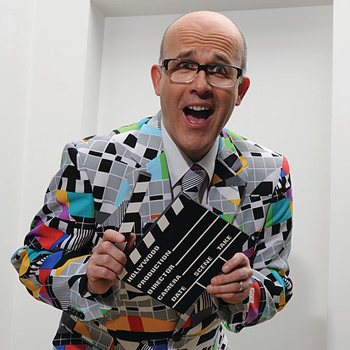 Corporate entertainment host, writer and TV presenter.
Nick Gough was born in Birmingham and began his working life in advertising before training as an actor.
He has appeared on the West End stage with Felicity Kendall and Sir Nigel Hawthorne in 'Hapgood' by Tom Stoppard and has toured in productions of 'Poles Apart' and 'Cluedo'.
On television he has appeared in 'Jackanory Playhouse' with Patsy Kensit and was the mad professor in six Shreddies commercials.
Nick has been writing and hosting tailor-made game shows for corporate events.  His shows are entirely written for and about the client organisation hosting the event, and range from quizzes to fully staged game shows complete with sparkling sets, props and costumes. His shows can be used as team building events or as suprise sessions within conferences.
Nick's 'Dickie Dazzler' show took centre stage at a global conference for one of the world's largest computer software companies. As well as interviewing special guests, he hosted interactive quiz rounds as part of the game show element of the conference. Although Nick's game shows are primarily used by corporate clients, Nick has also performed them privately.
In addition to being very busy with corporate bookings, Nick is a television presenter on the Living Channel.
Read More