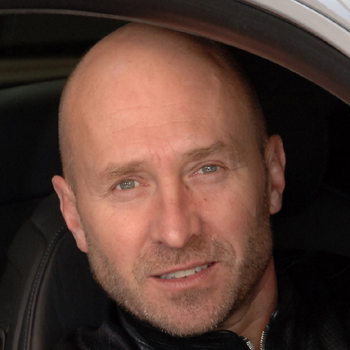 Perry McCarthy is one of Britain's top racing drivers and was the original Stig in the first series of BBC Top Gear.

McCarthy's rise through the ranks along with close friends Damon Hill, Johnny Herbert and Mark Blundell, has been against all odds and in a sport dominated by finance he recalls how he 'started with nothing and then lost it all!'

Perry's 10-year fight to reach the sport's elite paid off in 1992 when he was chosen to drive for the fledgling Andrea Moda Formula One organisation. The dream however turned into a nightmare as the team stumbled from one disaster to the next and in recent years he has turned his attention away from Grand Prix to Le Mans and the demands of Sports Prototype racing.

As always, Perry's exploits are well chronicled but when he is on the track his talent and determination shine through. His sense of humour is legendary and is frequently aired in his articles for leading publications and in his work as a TV commentator and programme presenter.

McCarthy's bubbly personality and absolute refusal to concede defeat have made him popular with the press; The Telegraph headlined him as 'a new cult hero'
The Times called him 'the world's unluckiest racing driver' and America's
Sunday Express described him as a 'comedian locked inside a racing drivers body'.

In a career spanning over twenty years, McCarthy is still smiling and still fighting. Along with Germany's Frank Biela and Finland's Mika Salo, Perry was recently chosen as a works driver for Audi UK's high profile 2003 assault on the famous Le Mans 24 Hour race. However, away from the track, Perry has used his experiences to become a superb 'after dinner' and 'motivational' speaker who gives a highly amusing insight to the world's most glamorous sport.

His hilarious autobiography Flat Out, Flat Broke published in 2002, was a motor racing best seller and received rave reviews.

"Perry was a very engaging speaker and I hope to be able to use him again in the future at some more events. He took our brief and ensured he created a speech pitched specifically at the HSE audience. The feedback from everyone has been fab and all that aside he was a lovely guy!"  Talisman Sinopec Health and Safety Awards - April 2014
Read More