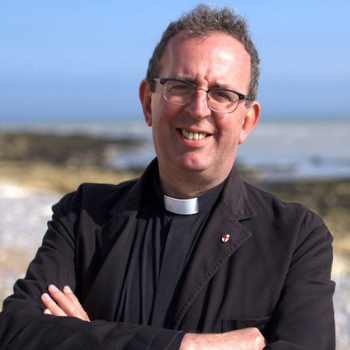 Former musician with The Communards who left the debauched life of a pop star (he certainly ticked the boxes with regards to Drugs, Sex and Rock n Roll!) to become a Church of England Vicar in rural Northamptonshire!  Now best known for hosting R4 Saturday morning programme Saturday Live and BBC1's Big Painting Challenge.

Richard was initially keen to pursue a career as an actor, but became session musician in the theatre instead. In 1983 he joined the band Bronski Beat as a sax player but left the following year to form The Communards, with lead singer Jimmy Somerville. Their three top ten records including 'Don't Leave Me This Way', the top selling single of 1996. When the band split up in 1988, Richard had money and time on his hands. He decided to study theology at King's College London and was awarded an MA for his work on St Paul's epistle to the Ephesians.
He had a brief spell as a Catholic, before being ordained an Anglican in 2005. He is now the parish priest of St Mary the Virgin in Finedon, Northamptonshire. He is openly gay (but celibate) and his witty and entertaining broadcasts have enlivened Saturday Live, Have I Got News for You, QI and Newsnight Review. His books include Lives of the Improbable Saints (2012), Fathomless Riches: Or How I Went from Pop to Pulpit (2014) and Bringing in the Sheaves (2016).
Richard is the inspiration for (and consultant to) Tom Hollander's Rev. Adam Smallbone in the BBC sitcom Rev and has even appeared on Strictly Come Dancing a few years back!
"We think Richard Coles is one of, if not the best, speaker we have had" - British Medical Association

"We were delighted with Richard Coles’ presentation, it was amusing, well delivered and appropriate for the day. We also appreciated the efforts he made to network with our guests before his presentation" - AXA Insurance

"We certainly appreciated your most amusing speech, which undoubtedly contributed to an outstanding dinner for our members and guests" - Independent Schools’ Bursars Association

"He didn’t just read a script, he delivered what we asked for and more- an event manager’s dream" - Lloyd’s List
Read More