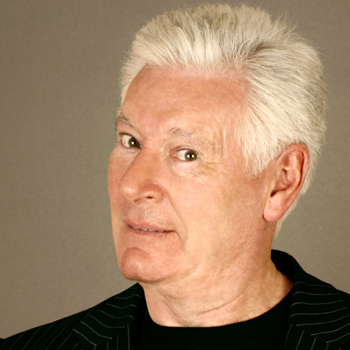 Roy Walker, well known to TV viewers through the ITV game show, CATCHPHRASE, has emerged as one of the driest comedians in Britain today.
His lugubrious style of humour his dead-pan expression and his approach to entertaining have paid handsome dividends. His casual line in patter has endeared him to audiences all over the country.

'To be honest, when I am on stage, I'm just being myself,' he admits. 'I tried all the quick-fire, clever stuff when I started out in the business but my Irish accent was such that no one could understand me. I had to slow down my delivery and the style just developed from there.'

He was born in Belfast and first became involved in entertainment at school where he sang in the choir and acted in the end-of-term plays. He also sang in the local church choir. It was as a boy soprano at the age of fourteen that he started out on the first steps to a career in show business. After auditioning at the Belfast Opera House, Roy was invited to join the celebrated Francis Longford Choir and for the next twelve months toured extensively, undertaking concert and theatre engagements all over the British Isles, including appearances at the London Palladium and on television.

'After a year my voice broke and I had to leave the choir. I returned home to Belfast and set about finding a job for myself,' he says. 'I eventually worked in a shipyard as an apprentice riveter but I spent much of my spare time entertaining on a semi-pro basis.'

Running parallel with his career in entertainment, however, Roy Walker showed exceptional talent on the athletics field. Aided by the coaching of Buster McShane, who guided Mary Peters to Olympic Gold, Roy became an outstanding prospect as a hammer thrower. He was Northern Ireland Champion for two years and represented his country on many occasions internationally. He was also considered a good Olympic prospect. 'I've always loved athletics,' says Roy. 'But I think I had gone as far as I could go as a hammer thrower when I came up against some of the giants of international athletics. Beside them I looked totally under-nourished.'

Following a short spell working as a partner to comedian James Young, Roy was summoned for national service and joined the army. He spent the next seven years in uniform yet still found time to entertain regularly. When he eventually left the service his sights were firmly set on a career in show business. 'But I couldn't find any work in Belfast,' he adds. 'So in 1969 I decided to move to England and set about trying to earn a living in the North-East where the club and cabaret scene was thriving.'

It was make or break time for the Belfast comedian and at first the going was extremely tough as he tried to establish a name for himself in comedy. To supplement his income during the day, while he toured the clubs at night, Roy took any job he could find, and in rapid succession, he became a baker, a postman, milkman, Physical Training Instructor, a clerk, bingo caller¦..and even washed dishes.

However, he was slowly building a reputation as a comedian, emerging as a very funny man in his own right and a firm favourite in clubland.

In 1977, Roy broke through to success and national prominence when he recorded the highest marks ever given to a comedian on television's NEW FACES. It was the start of a television career that has blossomed ever since and has seem him starring on all the major TV variety shows including LIVE FROM HER MAJESTY'S, BLANKETY BLANK, DES O'CONNOR TONIGHT, THE BOB MONKHOUSE SHOW, TARBY AND FRIENDS, THE PAUL DANIELS SHOW, THE LAUGHTER SHOW, LIVE FROM THE PALLADIUM, A NIGHT OF A HUNDRED STARS, LES AND DUSTINS LAUGHTER SHOW, LAUGH ATTACK and THE RUSS ABBOT SHOW, besides headlining such series as THE COMEDIANS and his own show, LICENSED FOR SINGING AND DANCING. Roy has also been a guest on WOGAN and hosted the TVS show, SUMMERTIME SPECIAL.

It was at the beginning of 1987 that he hosted his first series of CATCHPHRASE which went on to become a very popular and high-rating addition to the ITV Network scheduling each year. More recently it has also been screened on Challenge TV.

His summer seasons have included the Bournemouth International Centre (1985 and 1991); ABC Theatre, Great Yarmouth (1986); Futurist Theatre, Scarborough (1988); and four seasons at The North Pier Theatre, Blackpool (1987/1989/1993 and 1995). He has also appeared extensively with Russ Abbot, Shirley Bassey and Tom Jones and toured the country with his live stage version of CATCHPHRASE.

Pantomimes, have also played a big part in his career and he has consolidated his success with Christmas seasons in DICK WHITTINGTON at the Southport Theatre (1986/87); SNOW WHITE AND THE SEVEN DWARFS at the Hippodrome, Bristol (1987/88); CINDERELLA at The Mayflower Theatre, Southampton (1988/89); DICK WHITTINGTON at the New Pavilion, Rhyl (1991/92); CINDERELLA at The Thameside Theatre, Ashton-under-Lyne (1994/95) and The Grand Theatre, Blackpool (1996/97).

In September 1998, while he was filming CATCHPHRASE, he was surprised by Michael Aspel, with the big red book, as a subject of THIS IS YOUR LIFE.

He continues to headline concert, theatre and cabaret engagements throughout Britain and overseas.

On the personal side, his three children, Mark, Phil and Josie are all making exciting careers for themselves in show business. Away from show business, Roy's interests are golf, horses, skiing and sailing.